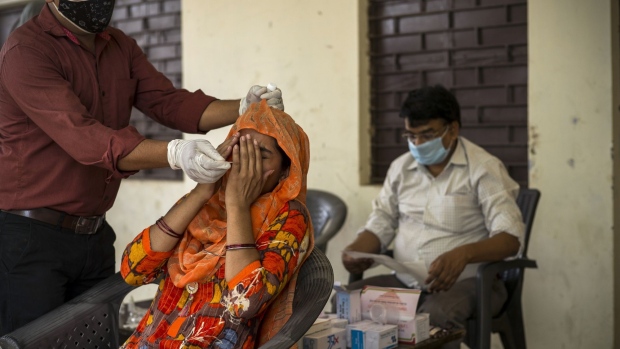 A health worker takes a swab sample at a Covid-19 testing site set up at the Panchayat house of a village in the Gautam Budh Nagar district of Noida, Uttar Pradesh, India, on Sunday, May 30, 2021. The resilience of the Indian economy -- which is on track to grow 10% in the year that began April 1, according to the median of 12 estimates compiled by Bloomberg News -- will be tested by its ability to overcome a devastating outbreak of Covid-19. Photographer: Anindito Mukherjee/Bloomberg , Bloomberg

(Bloomberg) -- India will need to spend an additional 800 billion rupees ($11 billion) to provide free vaccines and food to millions of people devastated by the deadly coronavirus wave, people with knowledge of the matter said.

The government will earmark an additional 700 billion rupees for providing food until November to the country’s poor and other eligible sections, the people said, asking not to be identified as the figures aren’t public. The administration will need an extra 100 billion rupees to provide free vaccination, they said.

Prime Minister Narendra Modi on Monday agreed to provide free inoculations reversing a botched policy where states ended up competing for supplies for certain age categories leading to severe shortages. His administration has also been censured for its handling of the second wave of the virus, which killed thousands of people.

Modi in a half hour-long address on national television Monday, said all Indians above the age 18 will be vaccinated for free starting June 21, vowing to speed the inoculation drive.

The government may not have to tap the bond market for the funds, the people said, citing the 991.2 billion-rupee dividend it received from the nation’s central bank and inflows expected from asset sales. With the extra spending, the government will end up spending a total of 1.3 trillion on providing food, the people said. It has already set 350 billion rupees on vaccinations in the annual budget. A finance ministry spokesman declined to comment.

The South Asian nation has administrated 232 million doses since the start of the world’s biggest vaccination drive that began on Jan. 16, with 3.4% now fully immunized. At this pace, it will take another 22 months to cover 75% of the population, according to Bloomberg Vaccination Tracker.

In February, even as infection rates began to rise, multiple state elections drew huge, largely unmasked crowds to hear candidates speak. Modi bragged about the size of the rallies he and Home Minister Amit Shah had managed to hold ahead of the vote in West Bengal, a densely populated state of more than 90 million people.

Officials also encouraged citizens to participate in the Kumbh Mela, a Hindu festival on the banks of the Ganges that is the world’s largest human gathering. Millions did, packing shoulder to shoulder by the edge of the sacred river.