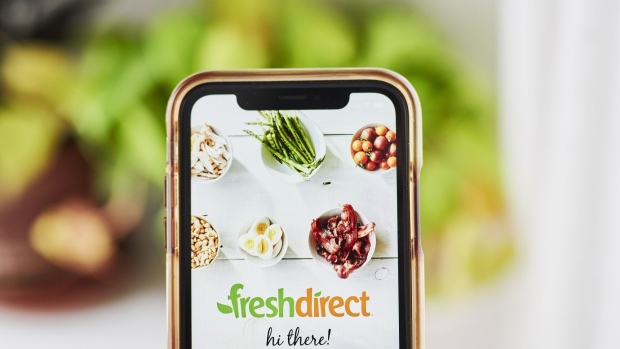 (Bloomberg) -- Fresh Direct pioneered selling groceries online years before most Americans even considered shopping that way. But now the retailer isn’t even the market leader in New York, where it debuted two decades ago.

Enter Ahold Delhaize, which bought Fresh Direct in a deal that closed in January. The acquisition gave the Dutch retailing giant (2020 revenue hit 75 billion euros) a foothold in the $9 billion online grocery market, America’s biggest. And now it’s turning to Farhan Siddiqi, who is serving as Fresh Direct’s interim chief executive officer while keeping his role as Ahold’s chief digital officer, to better compete with Instacart and Amazon.

Siddiqi’s growth strategy includes lowering some prices, despite creeping food inflation. He’s doubling down on New York by opening small, automated warehouses in the region to speed deliveries of wine and other popular items. And the retailer is also boosting its product assortment by 25%.

Bloomberg recently spoke with the Pakistan native about the battle to keep customers who shifted to online grocery during the pandemic and the brand’s ubiquitous delivery bags.

Fresh Direct has been around for a long time, but it has been vulnerable to newer competitors. What issues are plaguing the retailer?

Fresh Direct is a strong brand, but people have forgotten about it because of new entrants—these new shiny objects. Fresh Direct was in survival mode for a time. We need to switch it into growth mode, so we created a three-year plan.

The retailer used to dominate online grocery in New York, but Instacart now commands 45% of sales, compared with 21% for Fresh Direct, according to Earnest Research. How will you take some of that back?

Expectations for convenience are changing, and two-hour delivery is important now. So we will build two micro-fulfillment centers in Westchester and Long Island within the next two years to enable more express delivery.

Inflation is on the minds of a lot of shoppers, and you’re actually lowering prices?

Yes. We're lowering prices on fresh items like berries, salmon and ground beef. Right now we're also are absorbing inflation and not passing it along.

The cost of acquiring customers through digital advertising is becoming more expensive and often less effective. That’s why we’re increasingly seeing online retailers opening physical stores to win new shoppers and offer a more memorable experience. Are you considering that for Fresh Direct?

We are planning one or two pop-up activities this year in New York. These are more marketing-campaign type of pop-ups than an actual store.

Sales of alcohol online also boomed during the pandemic. Apps like Drizly, which Uber acquired for $1.1 billion earlier this year, have been cashing in. How does Fresh Direct plan to sell more booze?

We have a strong selection of alcoholic drinks, but could we have a dedicated drinks shopping experience? That would make it different from just adding a bottle of wine to your basket.

We now do a “Rosé Express” service to the Hamptons, which is 214 beer, wine and spirits items with delivery within two hours.

Finally, about those shopping bags. Before the pandemic, Fresh Direct switched from delivering food in cardboard boxes to reusable plastic bags. But due to Covid, the delivery bags were no longer returnable. Some customers, like me, have dozens of them piling up in my house. Is that policy going to change?

We are looking at that. People love those bags, and they are able to donate them. You will see some more sustainable options that we’re evaluating now. Can we do paper or cardboard? That is one thing we looked at and are actively validating. We need to think more progressively.

Editor’s note: This interview has been edited and condensed.