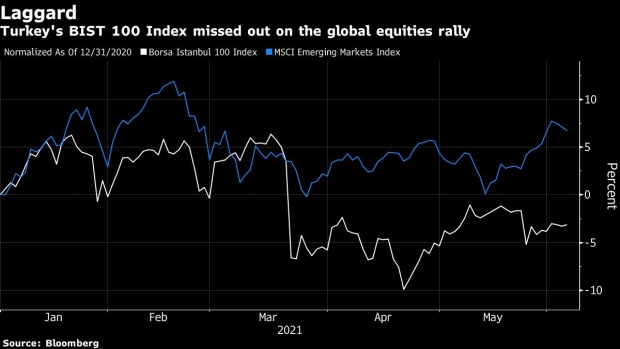 An electronic board displays currency exchange rates information at a currency exchange bureau in Istanbul, Turkey, on Wednesday, June 2, 2021. in the Grand Bazaar in Istanbul, Turkey, on Wednesday, June 2, 2021. Turkish President Recep Tayyip Erdogan renewed calls for lower interest rates despite elevated inflation, sending the lira to a fresh low against the dollar and prompting the central bank governor to push back against expectations of an imminent move. Photographer: Nicole Tung/Bloomberg , Bloomberg

(Bloomberg) -- In just three months, the Turkish lira has gone from best to worst.

The currency is the victim of the head-spinning policy swerves of President Recep Tayyip Erdogan, who is once again pressing policymakers to cut rates even as inflation remains at almost 17%.

This week’s confusing back-and-forth policy pronouncements from Turkey’s powerful leader and his central bank chief underscore what a perilous market the country has become, and unusual among major emerging markets. Investor trust has been shattered, foreign stock ownership is near all-time lows and the local-currency bonds have lost about a fifth of their value this year.

“The risk of policy mistakes has increased so much that it overrides any other investment rationale,” said Viktor Szabo, a fixed-income fund manager at Aberdeen Asset Management in London. The firm has exited the Turkish local bond and currency markets.

For investors, March 20 was the day that changed everything. Erdogan’s decision to fire his market-friendly central bank governor after just four months on the job showed unease with the concept of using higher rates to combat inflation -- a convention of modern economics.

Turkey’s markets have been depressed ever since. This week reinforced fears that Erdogan will keep pushing his agenda of rate cuts, despite May inflation of 16.6%, though the reading marked the first slowdown in eight months.

On Tuesday, Erdogan made a vague reference to summer months as a target date for a reduction in borrowing costs. Hours later, central bank Governor Sahap Kavcioglu tried to contain the damage. “Expectations for an early easing of policy, which aren’t based on a just reasoning, need to disappear,” he told investors.

Through all of it, the lira was relatively stable, weakening just 1% for the week to 8.66 per dollar.

In the eyes of investors that manage Turkish assets, the market is cheap and will bounce back once financial stability is restored.

“That investors shy away from a market with high macro event risks is understandable,” said Sebastian Kahlfeld, who runs a Turkish equities fund at DWS Group. “This should not cloud the fact, though, that several large Turkish companies are trading at record low valuations coupled with record-high dividend yields.”

Others say they’re simply not willing to bet on a market that’s burned them so many times before. Foreign investors have sold a net $1.6 billion in Turkish equities this year, leaving the market in the hands of local mom-and-pop traders, who are typically short-term investors.