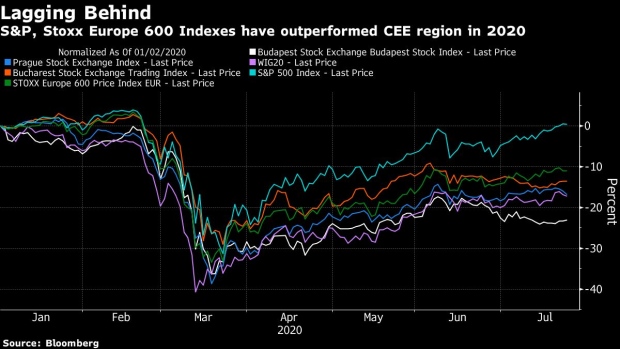 (Bloomberg) -- Equities in the European Union’s Eastern flank are generally undervalued compared with Western peers, but a return to economic growth next year is set to change that, says one of Hungary’s biggest fund managers.

The Central and Eastern European banking sector, especially, may outperform peers in western markets in the coming years, as the lenders are fundamentally healthy and will rapidly benefit from a revival in GDP growth expected in 2021, Gergely Pagyi, a senior fund manager at CIB Investment Fund, a unit of Intesa Sanpaolo SpA, said in an interview on Tuesday.

“Share prices are muted for the region’s banks despite the fact that there’s a very low risk of collapses or bankruptcies at the big names,” said Pagyi, who helps manage about 421 billion forint ($1.4 billion) and is investing in the region.

Relatively swift fiscal and monetary responses locally are set to help mitigate the economic effects of the coronavirus pandemic as authorities have learned their lessons from the 2008 financial crisis, Pagyi said. “The region could rebound parallel to the rest of Europe and follow in the footsteps of the U.S.,” he said. The European Union’s 750-billion-euro ($872 billion) stimulus deal will also provide support, he said.

Eastern EU indexes are currently lagging behind U.S. and Western European peers in their post-shock recovery because investors see them as riskier, especially in troubled times, Pagyi said.

Stocks in Prague, Warsaw, Budapest and Bucharest remain relatively cheap, trading at 11 to 13 times projected earnings over the next 12 months, versus multiples of 22 for the S&P 500 Index, 18 for the Stoxx Europe 600 and 15 for the MSCI Emerging Markets Index.

But some countries may see additional investor flows as they are upgraded by benchmark providers. Romania’s stock index is on track to be given emerging market status from its current frontier ranking by FTSE Russell this year, while expectations are high that the MSCI may take a similar step sometime in the future, Pagyi added.