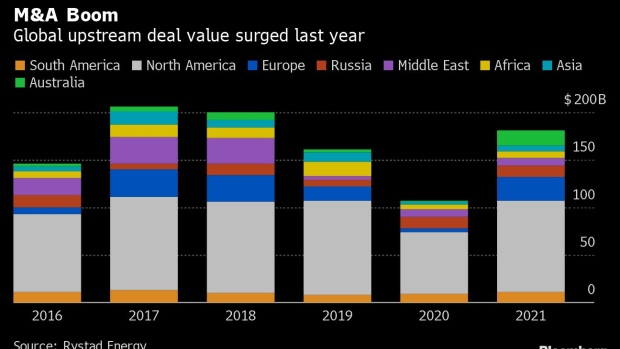 (Bloomberg) -- Last year’s blistering rally in natural gas and oil prices pushed mergers and acquisitions in the sector to a three-year high with no slowdown in sight, according to consultant Rystad Energy AS.

Global upstream deals reached a total of $181 billion last year, a 70% increase over 2020 levels when activity dried up due to the Covid-19 pandemic, Rystad said in a research report on Friday. Dealings in North America maintained their leadership, followed by Europe.

Gas deals accounted for 56% of all traded resources in 2021, up from 43% a year earlier, it said, adding that M&A “is likely to stay active for the foreseeable future.”

Oil and gas deals have picked up as major international producers are looking to less carbon-intensive operations, selling assets to smaller players that are still willing to work with fossil fuels.

The majors were the most aggressive in divesting resources in 2021, according to Rystad. “The top segment in terms of acquiring resources was public independents,” it said.