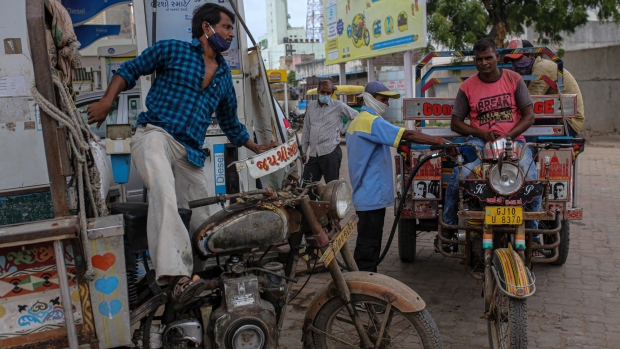 Refueling vehicles at a Bharat Petroleum Ltd. gas station in Jamnagar, Gujarat, India, on Saturday, July 31, 2021. Indian pump prices are in uncharted territory as ever-increasing government levies coincide with crude’s recovery from the depths of the Covid-19 pandemic. , Bloomberg

(Bloomberg) -- Indian tourists are hitting the roads and heading to the hills to escape a sweltering summer after months of tight restrictions due to a deadly Covid-19 wave, although the respite may be brief with a new outbreak looming.

The urge to break free following months spent cooped up at home is driving up demand for gasoline, which climbed above pre-virus levels last month. Pictures across local media show jammed highways and crowded markets in Himachal Pradesh, a scenic state in the Himalayas, while restaurants are filling up again.

“India’s gasoline demand is on the cusp of a V-shaped recovery as movement restrictions have been eased or lifted in several states,” said Senthil Kumaran, head of South Asia oil at industry consultant FGE. “So far, the release of pent-up demand has outweighed the impact of elevated retail prices.”

The recovery from the devastating outbreak that overwhelmed India’s health care system earlier this year is currently one of the few bright spots for fuel demand in Asia, as China and Indonesia grapple to contain flare-ups. However, India is likely to see a rise in Covid-19 infections building into a new wave that may peak in October, according to researchers, and the exodus to the hills has prompted concerns in the highest levels of government.

Confirmed Covid-19 cases in India ticked higher over the seven days ended Aug. 1, after steadily trending lower since mid-May, according to data compiled by Bloomberg. The delta variant has led to a spike in infections globally.

“Experts have been repeatedly warning that there could be a massive jump in corona infections due to carelessness, negligence and overcrowding,” Prime Minister Narendra Modi said during a meeting with chief ministers of India’s northeastern states. “We should try to stop the overcrowded events.”

Not even record high pump prices are discouraging Indian’s from escaping their homes and FGE is predicting motor fuel demand will continue rising the rest of the year. Consumption averaged 637,000 barrels a day in the second quarter and is expected to gain 12% through July to September, according to the industry consultant. Diesel demand is still lagging, however.

The preference for cars rather than public transport to avoid being infected is contributing to a drag on diesel. While sales are still below pre-virus levels, the nation’s top fuel retailer sees them recovering by the Diwali festival in November. Diesel accounts for almost 40% of total oil products demand.

“There is no let up in gasoline demand,” said Shrikant Madhav Vaidya, chairman of the Indian Oil Corp. “If we don’t see another wave, God forbid, we should get back to 100% capacity utilization of refineries by Diwali and diesel consumption would also reach pre-Covid levels.”