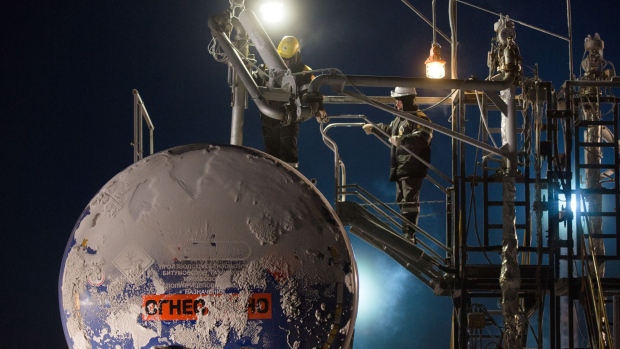 Oil workers pump oil into a tanker truck on the Russkoye heavy crude oil field, operated by Rosneft PJSC, in the Yamalo-Nenets region of East Siberia, near Novy Urengoy, in Russia, on Thursday, Dec. 8, 2016. The surprise $11 billion sale of shares in oil giant Rosneft PJSC to Qatar's sovereign wealth fund and Glencore Plc caps a 2016 that's only gotten better for the Russian President Vladimir Putin as the political tide moved in his favor. Photographer: Andrey Rudakov/Bloomberg , Bloomberg

(Bloomberg) -- Gazprom PJSC is preparing its massive Urengoy field in West Siberia for peak production in the upcoming heating season as Europe, the main buyer of Russian natural gas, battles the worst energy crunch in decades.

The Russian producer has started up two booster compressor stations at the project, according to a company statement late Thursday. The equipment, designed to raise pressure during treatment of gas and its supply to the pipeline system “will contribute to ensuring Russia’s peak output,” Gazprom Chief Executive Officer Alexey Miller said in the statement.

“It’s Gazprom’s task No. 1 to guarantee a successful autumn-winter period, to be a reliable supplier of gas to domestic and foreign consumers during the increased, peak, demand,” he said.

Gazprom has been under pressure to boost flows to Europe, where regional prices have been setting records amid tight gas supplies and below-normal winter stockpiles. While the world’s largest gas producer is pumping at multi-year highs, most of the output gains are staying at home, where gas inventories were also depleted to a record low last winter.

Such measures have prompted some European officials to say the Russian producer is intentionally capping exports to force a fast regulatory approval to start its recently constructed Nord Stream 2 gas link. The company has said it has been supplying its European clients fully in line with the contracts and will aim to hike deliveries “whenever possible.”

The Urengoy field, launched in 1978, is one of the company’s oldest fields and among the largest in West Siberia. Its output was 51.1 billion cubic meters in the first half of this year, nearly 20% of Gazprom’s total production, though the field is now at the natural decline stage. Gazprom said it continues to prepare additional production capacities at Urengoy.

“We would lose the volumes without the boosters,” he said. “We need to fight for every single million” cubic meters.

Gazprom, which plans to produce more than 510 billion cubic meters this year, is capable of meeting sharp demand hikes in winter by deploying spare production capacity of nearly 150 billion cubic meters, Miller said last week. The buffer “may be in demand for three or five or 10, maybe 12 days per year,” he said.