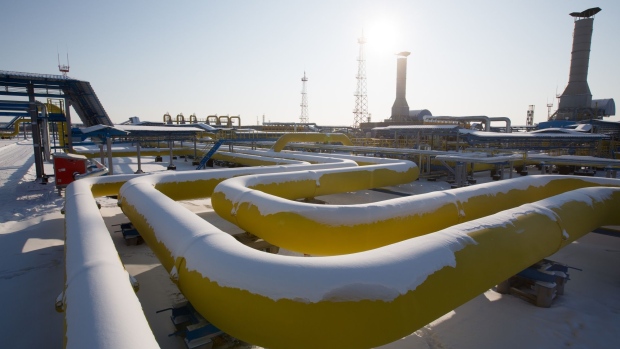 Snow covers sections of connected pipework in the yard at the Gazprom PJSC Atamanskaya compressor station, part of the Power Of Siberia gas pipeline, near Svobodny, in the Amur region, Russia, on Wednesday, Dec. 11, 2019. The pipeline, which runs from Russia’s enormous reserves in eastern Siberia and will eventually be 3,000 kilometers (1,900 miles) long, will help satisfy China’s vast and expanding energy needs. , Bloomberg

Gazprom PJSC’s restrictions on gas supply as European demand soars is “rare behaviour,” the European Union’s antitrust chief said as pressure grows on the bloc to investigate the Russian giant.

Margrethe Vestager, the EU’s competition commissioner, said she’s “eagerly awaiting” the Russian state-owned gas supplier’s answers to EU questions about supply shortages. EU lawmakers and politicians have urged her to open a probe into whether Gazprom is abusing its power by potentially squeezing supplies.

“It is thought-provoking that a company in view of increasing demand limits supply, that is quite rare behavior in the marketplace,” Vestager told a Brussels press briefing on Thursday. “The question of energy prices is very high priority.”

European natural gas prices have risen to records in recent weeks as Russian supplies slowed in the middle of winter.

Ukraine filed a complaint about Gazprom to the EU in December, saying the Russian state-owned firm deliberately cut shipments and prevented other companies from providing extra volumes. The allegation comes as Russia has been building up thousands of tanks and troops near the border with Ukraine, stoking western fears of an invasion.

Russian President Vladimir Putin said last month that Gazprom is complying with long-term gas-supply deals, and that the absence of shipments on a key route in recent days reflected a lack of requests from European clients.