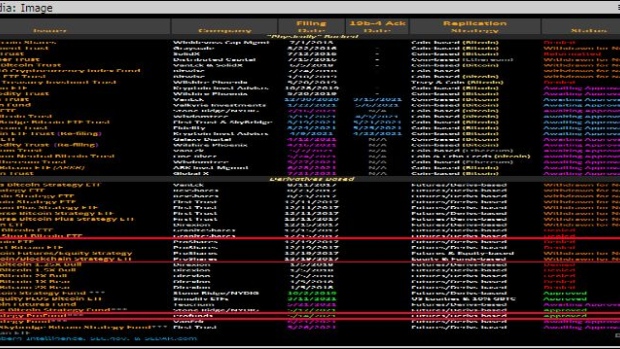 (Bloomberg) -- A few days ago, U.S. Securities and Exchange Commission Chair Gary Gensler signaled that regulators may be more open to a Bitcoin ETF if it was based around futures rather than the cryptocurrency itself. Fund managers are already putting that to the test.

Within the past 24 hours both ProShares and Invesco have registered plans with the SEC for funds based on futures.

“With Gensler indicating the SEC is more likely to approve a futures-based Bitcoin ETF over a physical one, the race is on to offer such products,” said Todd Rosenbluth, head of ETF and mutual fund research at CFRA. “There is pent-up demand for a U.S.-listed Bitcoin ETF. We expect to see more filings in the coming days.”

In remarks to the Aspen Security Forum on Tuesday, Gensler said that an ETF that complies with the SEC’s strict rules for mutual funds could provide investors with necessary protections.

“I look forward to the staff’s review of such filings, particularly if those are limited to these CME-traded Bitcoin futures,” he said.

Following Gensler’s announcement earlier this week, many crypto backers voiced distress over the chairman’s preferred structure. An ETF focused on Bitcoin futures would require that investors put down a substantial amount of money on margin to trade, among other issues. Many have been hoping for a physically-backed Bitcoin instead.

“All this does is add unnecessary layers of middlemen and derivatives. It’s not what the people want,” Eric Balchunas, Bloomberg Intelligence ETF analyst, said by phone. “Investors would be better served by a physically-backed ETF and I really think they understand the risks. At this point, even my mom knows what Bitcoin is about and that it’s not the same as a Treasury.”

Still, the futures-based funds would attract assets because they’ll be the best-possible offering right now, Balchunas said. He anticipates 10 to 15 new filings in the coming weeks, crowding out the field.

“It’s basically like the Kentucky Derby,” he said. “It’s like all these horses are now going over to this other track and rushing to the starting gate in hopes of getting approved.”