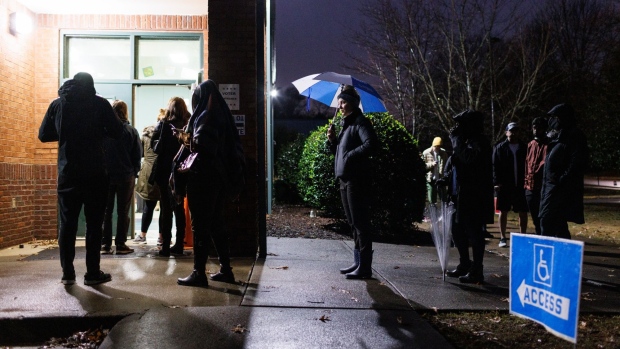 Voters wait in line outside a polling location during the runoff election in Atlanta, Georgia, US, on Tuesday, Dec. 6, 2022. Georgia voters Tuesday will decide whether to send Senator Warnock, a Democratic incumbent, back to Washington for a full six-year term or instead elect Republican Walker in the second consecutive runoff election for the seat in less than two years. , Bloomberg

Warnock beat Walker with 50.8% of the vote to the former football star’s 49.2%, according to the Associated Press, with 96% of votes counted.

President Joe Biden and his chief of staff Ron Klain, were already claiming victory for Warnock minutes before the race was officially called. Biden, as he stepped off Air Force One in Washington from Arizona, told reporters that “We’re going to win. We’re going to win Georgia.”

Klain congratulated Warnock in a tweet and said that Biden will become the first president since the 1930s to have every senator in his party who sought re-election to win. Democrats will have a 51 to 49 seat majority in the Senate.

“After a hard fought campaign, or should I say campaigns, it is my honor to utter the four most powerful words ever spoken in a democracy. The people have spoken,” Warnock said before a crowded room of supporters at a downtown Atlanta election night event.

The tight contest between Warnock and Walker went to a runoff after neither man broke the 50% threshold required for outright victory in the Nov. 8 election. A Libertarian candidate competed in the general, but not in the runoff.

In that election, Warnock got 49.4% of the vote, followed by Walker at 48.5% and Chase Oliver, the Libertarian candidate, at 2.1%, according to the Associated Press.

Republicans narrowly took the House in a worse-than-expected midterm election showing. Tuesday’s results cements Georgia’s place as a bona fide battleground state after being a Republican stronghold. Democrats keep both of the Peach State’s Senate seats with Warnock getting a full six-year term alongside US Senator Jon Ossoff who was elected in 2021.

An ex-Heisman Trophy winner, Walker was handpicked by former President Donald Trump to run. Trump, who last month launched a third presidential bid under his “Make America Great Again” platform, used the GOP primary cycle as a way to tighten his grip on the party.

Walker conceded at his election night gathering shortly after the race was called.

“Raphael Warnock’s victory shows once again that Democrats are in sync with America and MAGA Republicans are not,” Schumer said in a statement.

The two parties poured millions into Georgia to sway the race. Spending on the runoff, alone, dwarfed the cash spent there on the 2020 presidential election.

Warnock and allied groups spent $59.4 million in advertising in Tuesday’s runoff compared to $28.5 million by Walker and the GOP super-PACs supporting him, according to AdImpact.

Warnock is the pastor of Ebeneezer Baptist Church, where Martin Luther King once was the preacher.

“Georgia you have been praying with your lips and your legs, with your hands and your feet. You have put in the hard work and here we are standing together,” Warnock said.