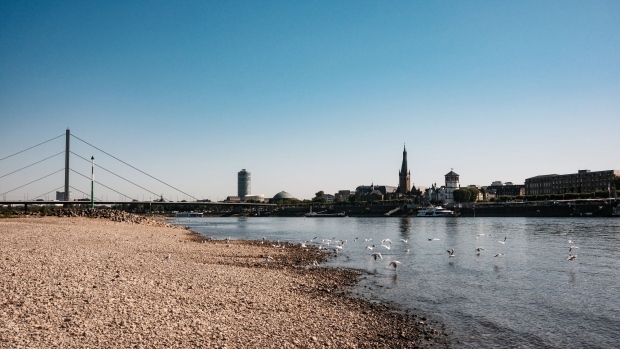 A section of exposed River Rhine riverbed, due to low water levels caused by drought, in Duesseldorf, Germany, on Thursday, Aug. 11, 2022. The River Rhine is set to drop well below a critical depth over the weekend, signaling further turmoil for shipments of energy supplies on one of Europe's most vital waterways. , Bloomberg

(Bloomberg) -- Container company Contargo GmbH & Co. KG said it will largely discontinue its barge business on the middle and upper Rhine because low water levels mean it can no longer operate safely.

The company will continue to use the lower parts of the Rhine and then move goods over land to other destinations, it said in a statement. Trucking capacities are limited, it said. A key marker on the Rhine, which companies use to calculate draft, fell Friday below a closely watched 40-centimeter level.

“Our barges will not be able to sail without danger” at that point, the company said.