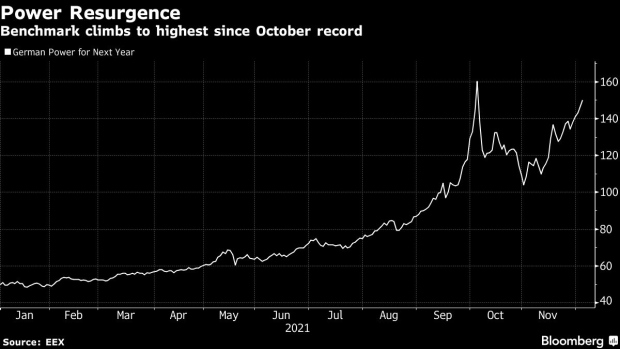 (Bloomberg) -- Benchmark European power prices jumped to a two-month high as the profitability of generating electricity in Germany climbed to a record.

A combination of fuel, electricity and carbon prices make up the so-called clean-dark and clean-spark spreads -- a measure of the profitability of coal and natural gas stations. A jump in power prices along with an increase in carbon permit costs and a drop in fuel prices has pushed spreads higher, with German coal margins for next year more than doubling in the past month to an all-time high.

Europe’s energy crisis is deepening. Gas prices have surged almost five-fold this year to levels high enough to prompt expectations that industry and manufacturers will need to cut output soon. A blast of cold weather that’s set to worsen next week is boosting short-term contracts.

“The fast rebound of the global economy after the lockdowns of 2020/2021, a cold and long winter in the Northern Hemisphere and a tight supply from renewables have led to the rapid increase,” in prices, said Carlo Cafaro, analyst and meteorologist at Marex Group Plc.

Longer-dated contracts like the German year-ahead are usually more stable than short-term prices that track changes in the weather. The year-ahead rose for a fifth day, adding as much as 3.2% to 150.90 euros per megawatt-hour, the highest level since October’s record 179 euros.

Surging fuel and carbon prices are boosting generation costs. Gas prices have led a red-hot rally, while carbon futures have climbed more than 140% rising above 80 euros per ton for the first time on Friday. Coal prices have almost doubled.

However, power prices across Europe have moved well above the levels implied by fuel and carbon costs in recent weeks, according to Glenn Rickson, head of European power analysis at S&P Global Platts. While significant risks in prices remain, the recent strength is overdone. He sees German 2022 power dropping to 136 euros a megawatt-hour at expiry.

A cold snap next week is driving daily power contracts across Europe to near-record levels. German power for Wednesday next week, when weather firm Maxar says sub-zero temperatures may hit Berlin, is priced about 323 euros per megawatt-hour, according to broker data. That would be higher than the day-ahead record of 302.53 euros set Oct. 6. on the Epex Spot exchange.

Germany Set for a Cold and Green Christmas: DWD Forecast

The cold snap is hitting France particularly hard. The nation is one of the biggest net exporters in Europe. Prices there are so high that it’s importing from countries like Germany and Britain, the opposite of what usually happens at peak times in winter.

Power demand in France is very sensitive to temperatures changes when it’s cold due to the widespread use of electric heating. In winter, demand increases by 2,400 MW with each degree Celsius drop in temperatures, according to grid operator RTE.