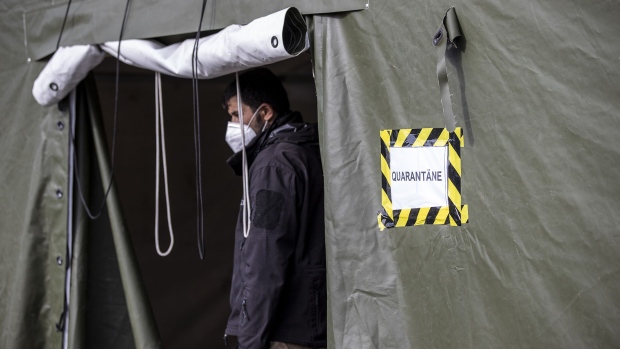 A quarantine tent stand near the entrance to a holding facility in Eisenhuttenstadt, Germany, on Oct. 6, 2021. Police have been detaining a growing number of illegal migrants, many of them from Iraq, who have been arriving at the German border from Poland, most of them most likely having arrived previously in Belarus before heading onwards. , Photographer: Maja Hitij/Getty Images

A growing number of people are crossing from Belarus into Poland and heading to Germany, creating concerns about an uncontrolled influx of refugees. Chancellor Angela Merkel’s administration has charged Lukashenko’s regime of encouraging the flows.

“This is a form of hybrid threat which we can not tolerate,” Seehofer told reporters in Berlin on Wednesday.

According to German authorities, 1,500 illegal migrants -- mainly from Iraq, Syria, Yemen, Iran and Afghanistan -- entered the country from Belarus in September. About 1,800 migrants have been registered so far in October.

“We can’t allow ourselves to be blackmailed,” Michael Kretschmer, the premier of the German state of Saxony, which borders Poland, said Wednesday in an interview with ZDF television. “We, as the European Union, have to show that we can stand up to this kind of despot.”

Germany offered assistance to Poland to monitor their common border, but excluded the possibility of imposing controls. Seehofer said he proposed joint patrols under Polish command on Monday in a letter to his counterpart in Warsaw. Poland’s government hasn’t yet responded, he said.

Seehofer called on the EU to develop a common strategy for dealing with migration and urged putting pressure on Russian President Vladimir Putin to intervene.

“The key to the solution of this problem lies in Moscow,” he said.

(Updates with comments from state premier of in fifth paragraph)