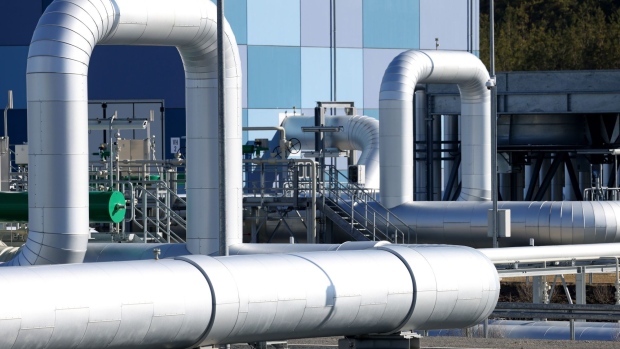 Pipework at the Radeland 2 compressor station for the European Gas Pipeline Link (EUGAL), a downstream pipeline for Nord Stream operated by Gascade Gastransport GmbH, in Radeland, Germany, on Friday, March 11, 2022. The European Union, which is dependent on Russia for about a third of its gas consumption, laid out measures this week to wean the region off Russian supplies this year but any immediate disruption would have widespread economic consequences, with soaring wholesale prices crippling industry and sending inflation even higher. , Bloomberg

(Bloomberg) -- Germany’s economy minister said he can’t be sure that Russia will resume shipments through a key gas pipeline following planned maintenance next month, raising the prospect of a fresh surge in prices and rationing this winter.

“I would have to lie if I said I didn’t fear that,” Economy Minister Robert Habeck said late Thursday in an interview with public broadcaster ZDF. His concerns were echoed Friday by Klaus Mueller, the head of the federal network agency, who said that flows through the Nord Stream 1 link might not restart even after the end of the 10-day maintenance period beginning on July 11.

Mueller also warned that prices for consumers could triple, and urged households and businesses to put money aside and save energy wherever possible.

“If we have a very, very cold winter, if we’re careless and far too generous with gas then it won’t be pretty,” Mueller said in an interview with public broadcaster ARD.

Germany on Thursday raised the country’s gas risk level to the second-highest “alarm” phase, one step below the third and final “emergency” stage which would involve state control over distribution.

Habeck warned of a potential collapse in energy markets, and made a comparison to the role of US bank Lehman Brothers in triggering the financial crisis.

Nord Stream is the main pipeline bringing gas from Russia to Europe’s largest economy, which still depends on the country for more than a third of its supplies. An alternative route is subject to Russian sanctions so isn’t being used, and Moscow is also squeezing flows to Europe via Ukraine.

Russian President Vladimir Putin has reduced flows to Europe in apparent retaliation over sanctions imposed following his invasion of Ukraine. The standoff escalated last week after Gazprom PJSC slashed shipments through Nord Stream, leaving it at only 40% capacity and putting Germany’s reserves for the winter at risk.

“The signal from yesterday with the alarm level is not that we’re now watching on powerlessly and staring at the snake like the famous rabbit,” Mueller said.

“It’s now up to us,” he added. “That means industry with all its options for substitution and saving. That means private households, who at last seem now to have woken up.”

Habeck is also trying to set an example. He told Der Spiegel magazine in an interview published Friday that he has “significantly shortened” his showering time.

“In the summer I really don’t like being in air-conditioned rooms, and in the winter I use the heating sparingly,” Habeck said. “Also, I come home late, get up at six and leave by seven. So you don’t have to heat at all in winter.”