Gold’s blistering rally isn’t over, according to fund managers who see another leg up for the precious metal.

Lower-for-longer interest rates, a weaker U.S. dollar and the U.S. presidential election will provide multiple catalysts for gains, even as tentative trade peace breaks out between China and the U.S. Gold has surged by about a third since August 2018 and is up more than two per cent this year, hovering near the highest in almost seven years.

The price increase, combined with capital discipline among the larger miners, is generating a bonanza of free cash flow while mergers could spark share gains among smaller players, according to five precious metals fund managers interviewed by Bloomberg.

“I have covered the sector for more than 20 years and I have never seen this kind of cash flow generation,” RBC Global Asset Management’s Chris Beer said.

In fact, the ratio of share price-to-free cash flow among senior miners, an indicator of valuation, still hasn’t caught up to the gold price, suggesting more room to run for stocks. After more than US$20 billion in mergers and acquisitions among large-cap miners last year, small and medium-sized companies could be next, providing another reason to buy.

“It would be hard to eclipse the dollar value of M&A of last year, given there were some large deals, but we will likely see a higher number of deals this year,” Sprott Inc. CEO Peter Grosskopf said. 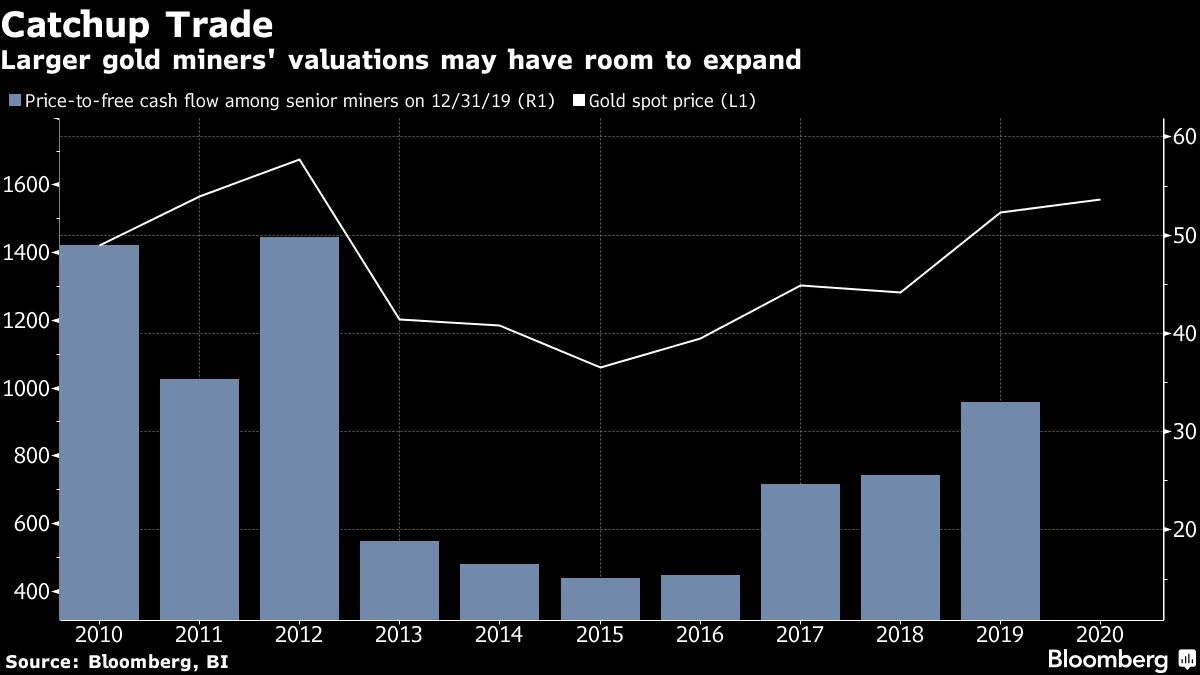 Here’s the view from gold investors:

• Gold likely to see some downside in the first half of the year as bond yields are expected to find a bottom. However, trade war and election rhetoric may heat up in the second half, supporting the price.

• The phase one trade deal between the U.S. and China announced Wednesday is like “putting the genie back in the bottle” and likely to be seen as a temporary solution by the market. The prospect of a Democrat in the White House will weigh on the equity market, pushing gold higher.

• When miners report fourth-quarter results, he’ll focus on 2020 guidance, capital discipline, how safe their margins are and how cash is being reinvested.

• In terms of mid-cap mergers, companies that aren’t in ETFs are “in real risk of being irrelevant” to asset managers. Combining the best management teams with the best assets will attract more ETF flows, keeping them relevant.

• Even though rates will probably not go much lower, the Fed’s dot plot forecasts show they’ll be low for a while. Moreover, the U.S. dollar is likely heading into the weaker part of its cycle, which could lend to the “next leg up” for gold.

• Gold miners are now “impressively disciplined” with capital allocation and are generating free cash flow even with conservative gold-price assumptions.

• Single asset companies are trading at a discount. If these miners combine and grow their market value, generalist investors will have to take a look, due to their higher weight in the index. The deal between Detour Gold Corp. and Kirkland Lake Gold Ltd. would be such an example.

• Historically, gold price rallies driven by geopolitical events are quite short-lived and there will likely be some volatility and downside to gold prices after the U.S.-China trade deal was signed.

• However, the lagging effects of the trade war will lead to falling bond yields and a potential rate cut by the Fed in the middle of this year.

• To pick the right stocks, he’ll be looking to see if free cash flow keeps up and what gold price companies are using to calculate reserves, maintain cost structures and increase margins.

• In a volatile gold market, “my job as a good stock picker is to own the stocks that I like to own with or without political events going on in the world.”

• Exploration plays are what excites Cohen as they have the most upside. About 40% of his stocks in the exploration sector are Australian-listed, and he likes Bellevue Gold Ltd. which has “good bang for your buck.”

• In North America, one of his favourite exploration plays is Great Bear Resources Ltd., which could be “the next Hemlo,” referencing to Barrick Gold Corp.’s giant mine in Ontario. K92 Mining Inc., SilverCrest Metals Inc., Mag Silver Corp. and Wesdome Gold Mines Ltd. are among other stocks that he likes.

• By no means is gold in a bull market yet. “It’s a decent market,” he said, and this has kept retail investors on the sidelines. The right indicator for a bull market will be more active equity offerings, which will indicate that outside investors are piling into the sector.

• He prefers silver over gold.

• Expects more deals focusing on companies with single-asset mines as their shares are trading at “basement levels” and “have been largely left behind” by broader investors.