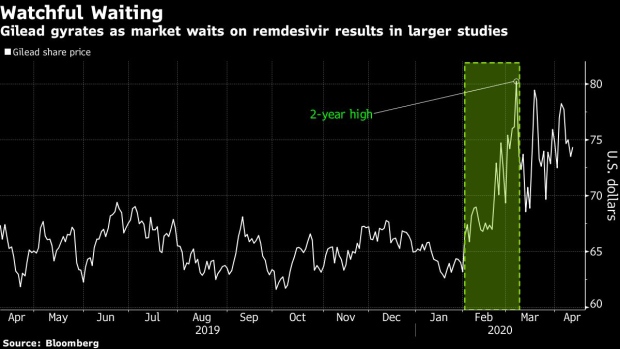 (Bloomberg) -- Gilead Sciences Inc. rose Monday after results from a small set of Covid-19 patients getting the experimental therapy remdesivir. While acknowledging it was too early to tell if the medicine would work in larger studies, Evercore ISI called it “a ray of hope.”

Raymond James analysts were more critical. “We did our best to try and make sense of the small dataset and our conclusion is, unfortunately, remdesivir may not be doing much. We hope we’re wrong.”

The medical community as well as Gilead investors were awaiting more detailed data from larger studies out of China, though the timelines for a large placebo-controlled study -- the gold standard of clinical data -- are looking more and more delayed.

A study in severely ill patients in China was ended early on low enrollment, Daniel O’Day, Gilead’s head said in a letter on Friday. It’s unclear when investors will see that data. Cantor’s Alethia Young said this may have been due to a lack of those very sick patients in China. Evercore ISI analyst Josh Schimmer said while that’s plausible he questioned if China might be slowing the flow of information “to gain a competitive geopolitical advantage.”

Raffat said he was “cautiously optimistic.”

“Overall, hard to draw definitive conclusion, but a ray of hope,” he said, “I wish we had a comparator arm, but with that said, the discharge rate in patients NOT needing invasive oxygen support looks encouraging.”

“Until a couple of weeks ago, it felt as though we were getting ‘real time’ updates with rapid data publications out of China, but the cadence of publications isn’t as intense now – at a time that we need all the information we can get to better understand the evolution of COVID,” Schimmer wrote.

“It’s plausible that a paucity of new cases in China has itself caused research activities to ebb,” he said, but also pointed to reports that “China is now censoring COVID research–especially on the origin of the virus.”

The mortality rate in severe cases of the viral infection is “not particularly noteworthy” and fall within previously reported ranges. The analyst pointed to likely ascertainment and censorship bias, noting the manuscript only reported on 61 of over 1,700 treated under compassionate use programs.

“Controlled studies will give us a better perspective on statistical evidence, but we also weigh these results against the urgent clinical need for medicines that can work, particularly in the severe setting. We do think that these encouraging data will increase the overall rhetoric to make this drug more broadly available (potentially on a conditional basis).”

“Median duration of invasive mechanical ventilation was two days before starting treatment; we think that this is noteworthy since the longer patients stay on ventilator, the bigger the risk of death. Of course this population remains the most urgent since studies in China have shown that upwards of 80% of patients on ventilators unfortunately don’t survive.”

“The data are likely not sufficient to convince people that this could substantially end the crisis, but enough to believe there is some chance remdesivir, along with other meds in development, could play a potential role helping somewhat blunt morbidity/mortality from the disease.”

Remdesivir “still has a shot at showing a benefit” in late-stage testing “especially with the endpoints now made more sensitive, though still not an overwhelming likelihood of dramatic effects.” He expects more room for the stock to gain with “some reason for hope maintained.”

The analyst was positive after only 13% of the patients in Friday’s update died, but noted further deaths in the group were likely as some patients still required ventilation. “By comparison, in most of the other large studies we have identified, the mortality for ICU admitted patients is 50% or higher, and the mortality in ventilated patients is 60%-90%.”

He cautioned that “there are no perfect comparable cohorts, and so far there are no placebo controlled trials in patients with severe COVID, so any comparisons are highly subjective.”