Keep your trades small as more volatility may be just around the corner: Tastytrade's JJ Kinahan

Commodities will get intense scrutiny for the rest of 2022 after a first half dominated by the supply turmoil and inflationary shocks unleashed by Russia’s attack on Ukraine. Here, we look at what the rest of the year holds for raw materials from crude oil and natural gas to grains, gold, and iron ore.

The second half will be about how consumers, businesses and governments cope with the shockwaves to commodity flows. Either the global economy can withstand the sky-high prices needed to maintain tight supplies -- especially for energy -- or soaring prices will be cured by recessions.

In natural gas, Russia’s supply cuts open a troubled new era for Europe. In oil, OPEC’s next move is crucial, and in food, there are some signs of prices cooling. The fate of China’s beleagured property sector will be crucial for metals, while central bank moves to crush inflation pose a broad headwind.

“Even if we don’t feel it yet, we are in a gas crisis,” said Germany’s Economy Minister. Russia’s squeeze on flows to Europe risks a historic global shortage - and higher prices still -- with peak demand looming this winter. Consumer nations are preparing to run economies without the fuel, and competition for liquefied natural gas between Europe and Asia will intensify -- all the more so if a key US export plant stays shut. 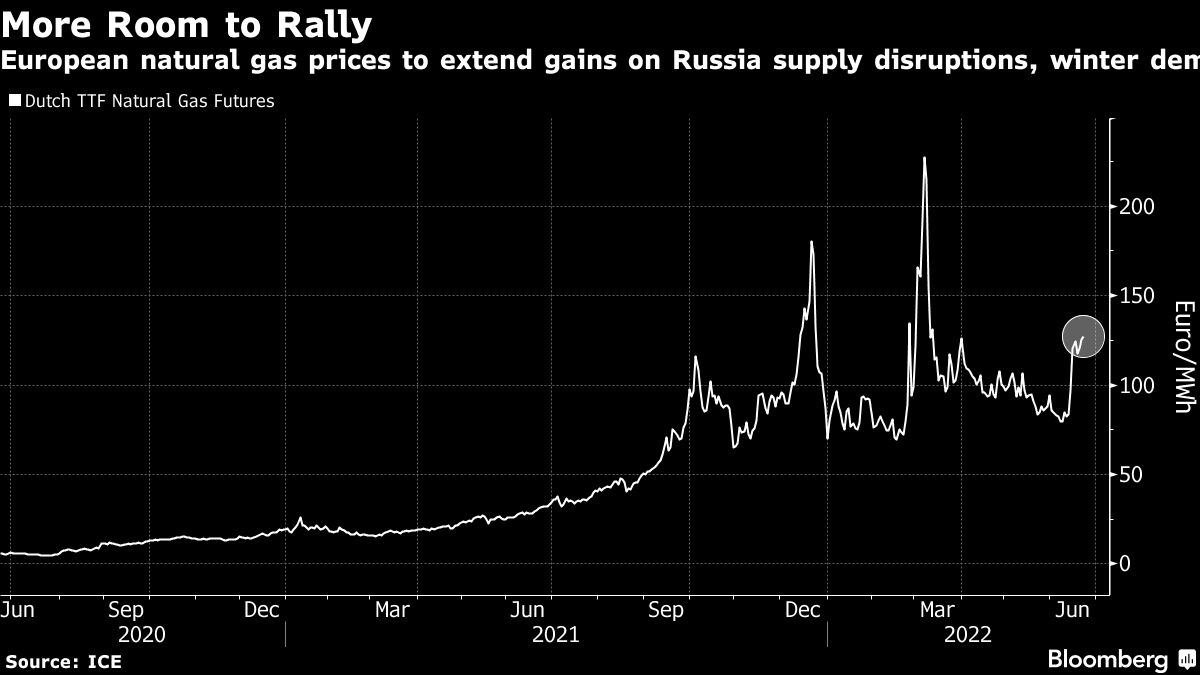 Expensive gas will increase power bills for households and businesses, and a full-blown crisis would shut industries from chemicals to fertilizers, fanning the flames of global inflation. Germany is preparing to trigger the next stage of its emergency plan, and gas rationing across Europe is a real prospect. In Japan, one of the world’s top LNG importers, the government is trying to curb consumption and is considering unprecedented moves to procure more fuel.

Is the global food crisis past its worst? There’s growing talk that grains and cooking oil prices have peaked -- and maybe global food costs have too. More supply is on the way, with winter wheat harvests getting under way in the northern hemisphere, and spring wheat, corn and soybeans following later. The focus then turns to production in Australia, Brazil and Argentina. Barring weather woes, output could rise as farmers plant more in response to elevated prices. 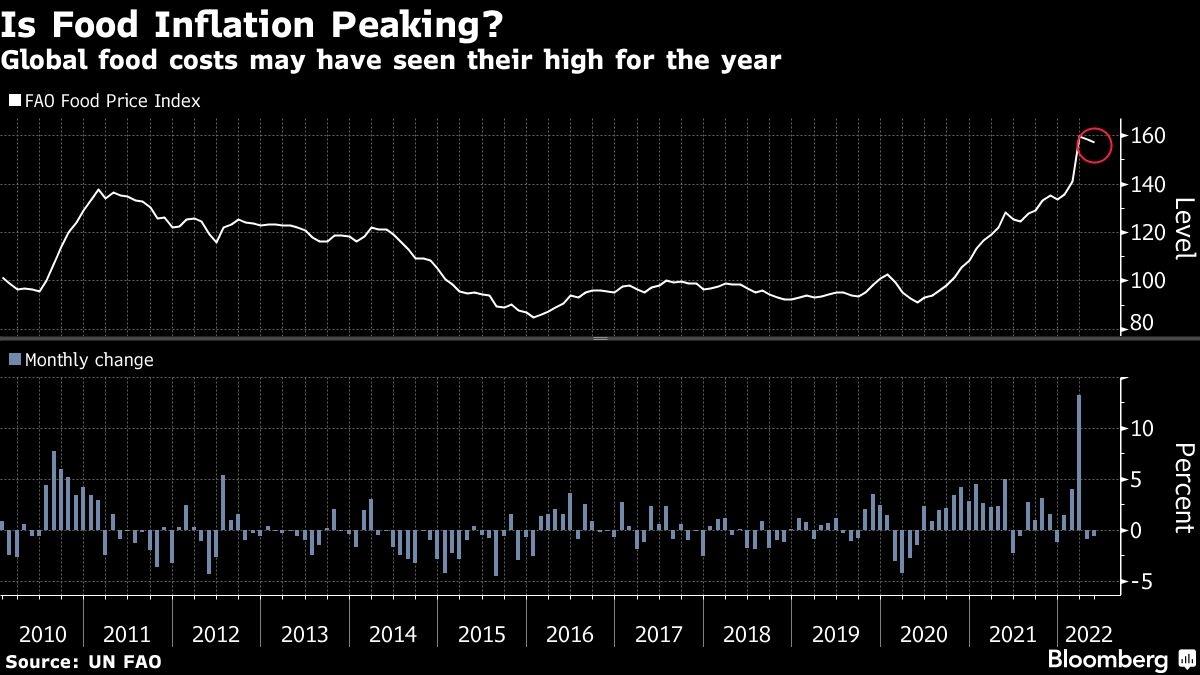 Global stockpiles will remain crimped in the coming season -- and millions of tons of grains are stuck in Ukraine -- but they may not get substantially tighter. Some Ukrainian cargoes are reaching Europe, while Russia is heading for a bumper crop. Palm oil, the world’s most consumed edible oil, just slumped to its lowest level this year as top producer Indonesia ramps up exports, while wheat, corn and soybeans have tumbled from their highs. Global food costs have already fallen from their all-time peak in March, and more declines could follow.

Refined products from gasoline to diesel are the oil market’s hot spots right now, and the big question for the second half is whether demand can be sustained amid rocketing prices. A cocktail of fuel subsidies keeping consumption afloat -- together with limited refining capacity -- has powered rallies that have outstripped crude prices. US gasoline at US$5 a gallon has caught political attention, which could trigger policy actionahead of the November mid-term elections. 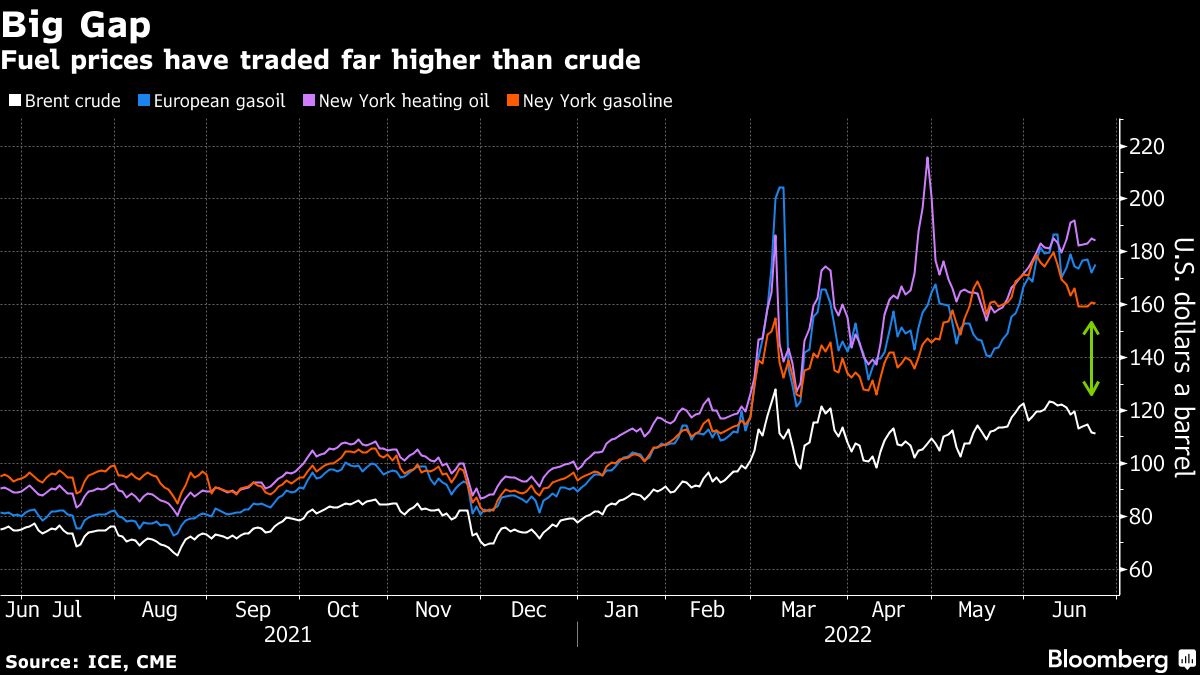 There’s little consensus on what’s happens next in crude, but we can expect louder discussions about how much OPEC and its allies can or will pump -- especially if prices stick above US$100 a barrel. While Citigroup Inc.’s veteran oil-watcher Ed Morse sees crude easing to the US$80s by the fourth quarter on “strong headwinds to growth”, Goldman Sachs Group Inc. is among notable bulls, saying oil prices needing more gains to normalize “unsustainably low” inventories.

Tumult in Europe and the Federal Reserve’s hawkish turn have left issues in China arguably less decisive than usual for commodities markets. But the top importer of energy, metals and crops will still be a key factor in coming months, especially if the economy ramps up to meet President Xi Jinping’s goal of 5.5 per cent annual growth. That would lift demand, but metals markets in particular show why bets on any massive stimulus boost may prove risky. 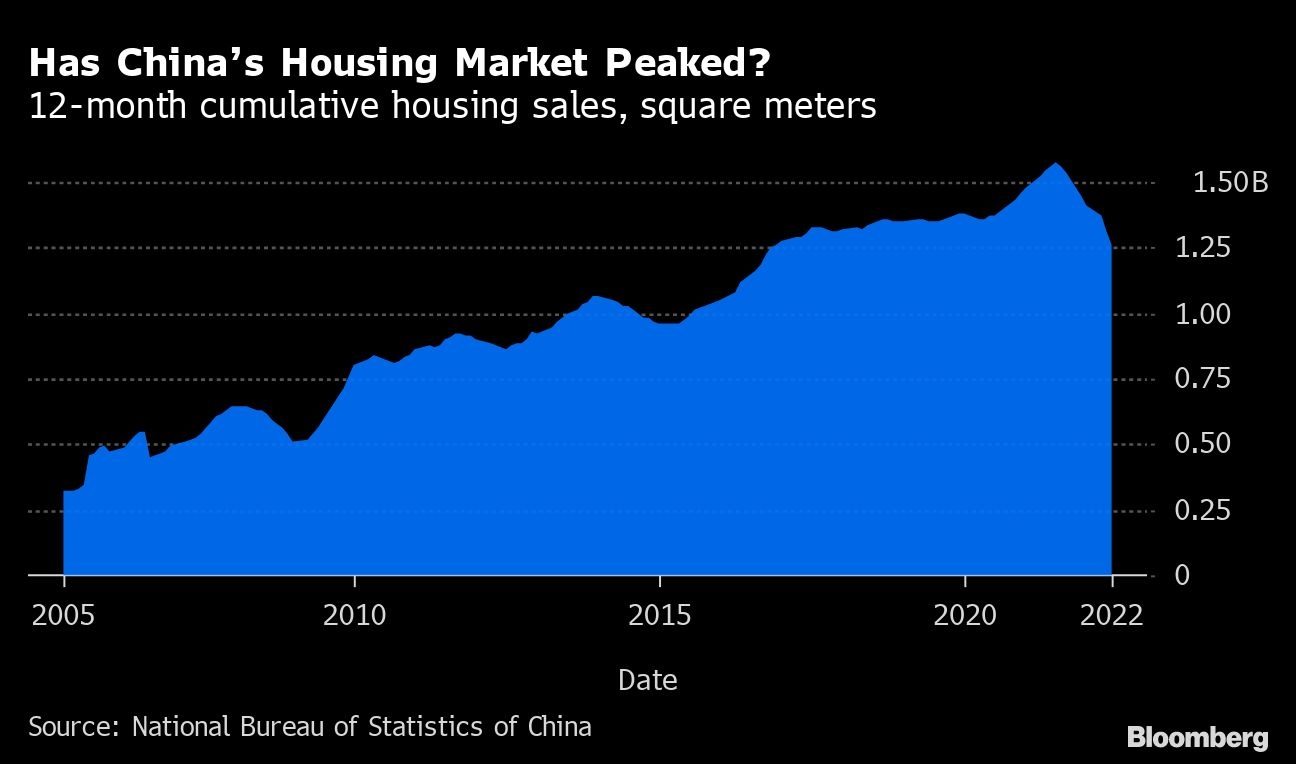 The heart of the problem is China’s ailing property market, which has been in a long-term downturn since Xi warned that housing was “not for speculation.” There are few signs that the government is close to reversing its squeeze on a sector that was absolutely pivotal in rebooting iron ore and copper markets after previous downturns. Extra infrastructure spending just isn’t enough to offset the loss. That puts Xi’s growth goals at risk, which means iron ore might struggle to match this year’s highs.

After spiking to a record after Russia’s invasion, gold is back to where it started the year, and consensus forecasts for the fourth quarter put prices just a smidgeon above where they are now. If that looks a bit boring, remember that the powerful forces keeping the precious metal in check speak directly to the dynamics shaping wider commodity markets. Certainly, gold faces some intimidating headwinds: outsized interest rate hikes from the Fed and other central banks; a strong dollar; and struggling physical demand in top consumer China. 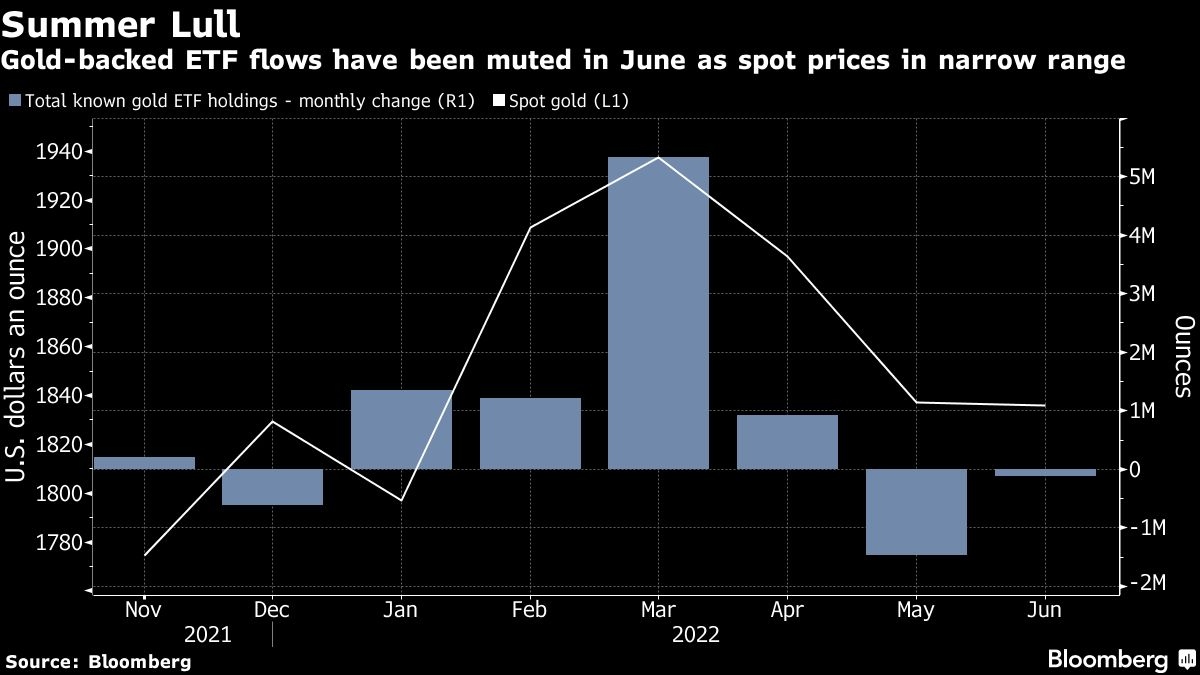 But doubts over the Fed’s ability to fight inflation without a US recession are lending support, and a hard landing for the global economy could revive haven demand. In that sense, gold will be the measure of whether central banks can rein in price pressures without crushing growth. The tried and tested haven asset has been above US$1,800 for most of the first half and might end the year there unless there’s another major shock.

Lithium prices are revving up again after a brief pause in anotherwise sizzling rally over the past 18 months. The vital ingredient in electric-vehicle batteries could be in for further gains in the rest of 2022, with demand in the world’s largest EV market reviving after COVID-19 curbs that saw manufacturing slow and consumers halting car purchases. 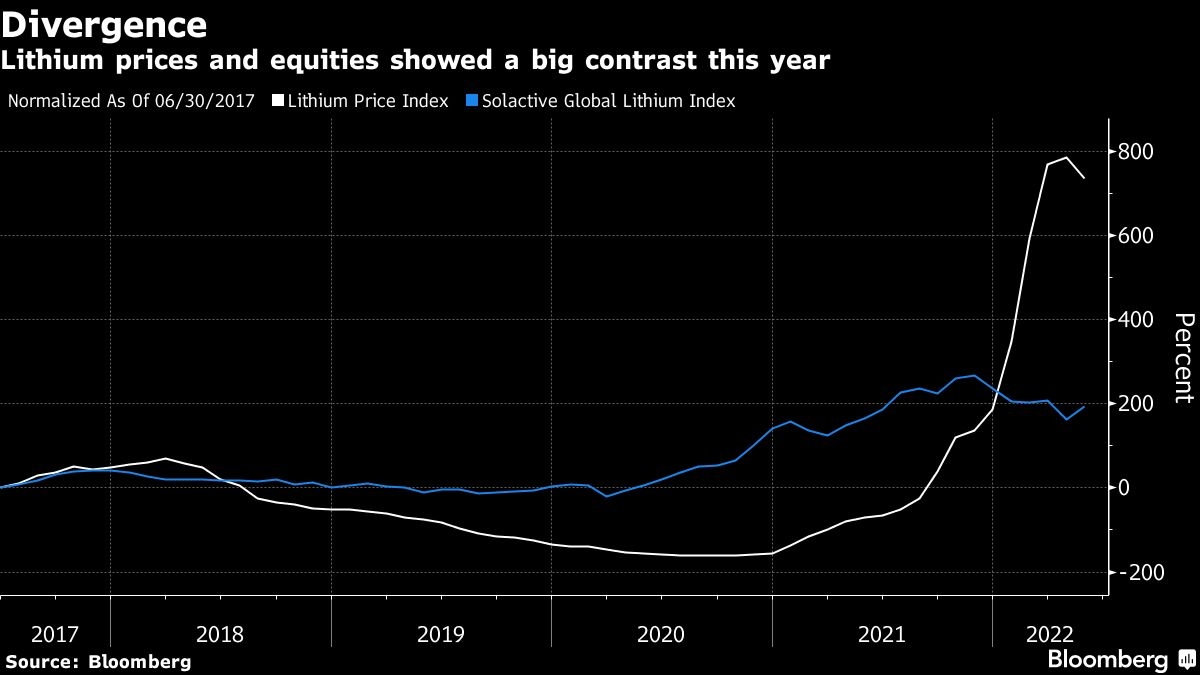 Shares in lithium producers might finally catch up with the spike in lithium prices. Optimism around battery metals at one of world’s largest mining conferences recently in Toronto suggests that big money -- especially from generalist investors -- may soon flow into the lithium market. A solid demand recovery in China will help the market soak up additional supplies on the way, including from top produers Albemarle Corp. and SQM.