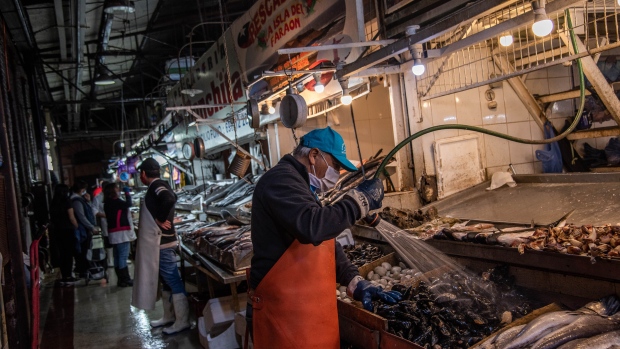 A worker wearing a protective mask washes seafood at a stand inside a fish market in Santiago, Chile, on Friday, April 17, 2020. Chile has confirmed more than 9,700 infections nationwide, as lockdown measures continue. Photographer: Cristobal Olivares/Bloomberg , Bloomberg

(Bloomberg) -- The World Trade Organization announced it will miss a 2020 deadline to secure an agreement prohibiting subsidies that threaten the sustainability of global fishing, as countries including China and India hold out for an exemption.

As part of a UN Sustainable Development Goal target, negotiators were tasked with eliminating subsidies for illegal, unreported and unregulated fishing and prohibiting certain subsidies that contribute to overcapacity and overfishing. Talks have also been held up by Covid-19 restrictions on meetings and the change in the U.S. administration.

Globally, such subsidies amount to an estimated $14-$54 billion per year, according to the WTO.

“Members had mixed views on the timeline for 2020 in light of Covid-19 disruptions but all are determined to deliver a meaningful outcome,” Santiago Wills of Colombia, chair of the negotiations, wrote in a statement that said an agreement could come early next year.

The talks -- which have been ongoing for more than a decade -- gained a new urgency in recent years as the world’s fish populations fell below sustainable levels. According to the WTO, some 34% of global stocks are now over-fished compared with 10% in 1974. The subsidies allow fishermen to venture further afield from their homes, and for prolonged periods of time.

China, the world’s largest fish producer, has argued that it relies on high-seas fishing to feed its 1.4 billion people and that a blanket ban on subsidies would be unreasonable.

In 2018, China handed out $7.2 billion in fishing subsidies, accounting for 21% of the global total, according to Elsevier, $5.8 billion of which was “harmful” because it expanded capacity. More than half the money is used to provide cheap fuel. In July, hundreds of Chinese fishing vessels were spotted in waters around a protected reserve off the Galapagos Islands, 15,000 kilometers from China, prompting a further rebuke from U.S. Secretary of State Michael Pompeo.

“In theory, fishing should be held in check by its very environment: low fish stocks should mean fishing takes more time and costs more money,” according to the WTO. “The problem, however, is that very often state funding keeps unprofitable fishing fleets at sea.”

The final agreement should avoid loopholes that would “undermine its conservation goals and allow the status quo to continue,” Isabel Jarrett, manager of The Pew Charitable Trusts’ project to end harmful fisheries subsidies, wrote in a statement on Monday. “Developed nations should not be granted exceptions that allow them to continue providing destructive fishing subsidies even if they’ve put management measures in place.”