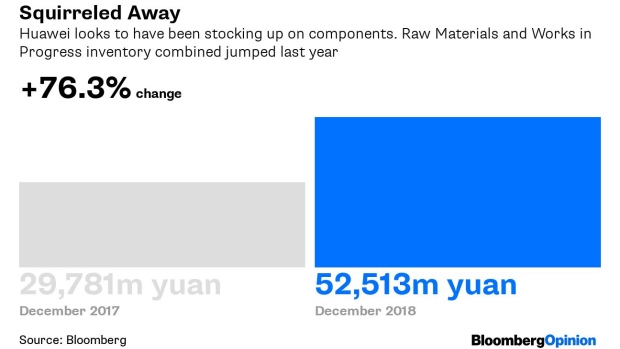 (Bloomberg Opinion) -- Ten months ago, I warned that storm clouds were brewing over the global technology industry. The situation today is much worse.

Back then, a U.S.-China trade war was more risk than reality, Apple Inc.’s pending iPhone update held promise, and central banks were still in tightening mode. Yet inventories at the end of June 2018 had climbed to the highest since the financial crisis a decade earlier and a sector-wide slowdown was looming.

At the time, the Pollyannas were louder than the Chicken Littles. The next iPhone had yet to launch and Christmas shopping season was coming, argued the optimists.

Since then, global technology companies have issued loud warnings about lost sales due to U.S. actions against Huawei Technologies Inc. In short, because the U.S. is restricting what can be sold to the Chinese giant, the company and its suppliers are cutting orders. This is causing a ripple effect from semiconductor materials supplier IQE Plc to chip designer Broadcom Inc.

But there’s something you need to know about the Huawei effect: It isn’t the cause of this technology recession. If anything, the company is the reason why the situation didn’t worsen earlier. The U.S. war on Huawei propped up the tech sector, notably semiconductors, over the past year.

Let me explain. Immediately after the Trump administration in May blacklisted Huawei from buying U.S. components, Bloomberg News reported that the maker of telecommunications equipment and smartphones had been been stockpiling components in anticipation of some kind of action. Chairman Ren Zhengfei saw his own storm brewing and started saving for the rainy day that came on May 17.

This tells us that some proportion of global component demand over the past year wasn’t led by end-product sales, but merely by shelf-stocking. More significantly, what revenue component makers did see was probably a false signal, pointing to demand that didn’t exist.

These suspicions were confirmed earlier this month when Mark Liu, chairman of made-to-order chipmaker Taiwan Semiconductor Manufacturing Co., told me that he wasn’t sure how much of his company's recent revenue had gone to supplying Huawei’s end-product demand versus building the Chinese company’s inventory. Almost every technology company is a client of TSMC. If Liu, who has the broadest and deepest picture of the global tech sector, can’t make out the difference between demand and inventory build, then you can be sure he’s not alone.

There’s also solid data to show the scale of Huawei’s stockpiling. Total inventories climbed 33% last year. Its stash of components – measured as raw materials and works in progress – jumped 76%. At even its most optimistic, there’s no way that Huawei expected 76% revenue growth this year.

Which brings us back to the sector as a whole.

Here’s an update of the numbers compiled 10 months ago, based on nine leading technology hardware companies and charted by my colleague Elaine He. The results aren’t heartening:

With few exceptions, inventories – measured in dollar terms or days outstanding – climbed since June 30, 2018, and were unequivocally higher than two years ago. The revenue slowdowns that have affected every corner of the hardware sector this year make this buildup ominous.

Of even greater concern are data pointing to prolonged cash conversion cycles, a measure of how long companies take to turn manufactured goods into money. The only firm to see a solid dip is Apple, and that’s because it tends to generate revenue from customers before having to pay suppliers. Both TSMC and iPhone assembler Hon Hai Precision Industry Co. (aka Foxconn) have said they hold inventory on their books for their key client. Were it not for that fact, Apple’s rising inventory days outstanding would probably be even higher.

A major reason for Hon Hai posting weak earnings in the first quarter was inventory provisions. Those can be reversed if products sitting on shelves get sold to consumers, Hon Hai CFO David Huang told me this month. But shipping an already-made device to meet demand means you don’t need to manufacture a new phone, which in turn means no need to buy components from suppliers, and so forth.

That’s the situation we’re in now: plenty of inventory, false signals from the Huawei effect, and a pending global economic slowdown that’s likely to suppress demand. If that doesn’t make make you worry about the state of global technology hardware, then I applaud your optimism.