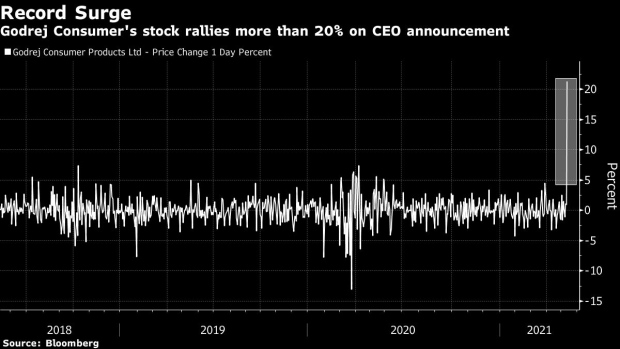 (Bloomberg) -- Shares of India’s Godrej Consumer Products Ltd. surged by a record as analysts and investors lauded the company’s appointment of a former top executive at Unilever Plc’s local unit as its chief executive officer.

The stock rallied almost 25% before paring gains to 21% as of 2:40 p.m. in Mumbai, but was still the top gainer of the MSCI Asia Pacific Index. Mumbai-based Godrej, a maker of personal- and household-care products, Tuesday named Sudhir Sitapati, who was recently executive director of the foods and refreshment business at Hindustan Unilever Ltd., as its managing director and CEO for a five-year term. The appointment is effective Oct. 18.

“Godrej has underperformed most of its peers in the past few years, which may change as the new leader brings in a new strategy that may entail some hard decisions,” Vivek Maheshwari, an analyst at Jefferies India Pvt., wrote in a note.

Wednesday’s jump in Godrej shares, which came amid a broad selloff in Indian and regional equities and despite the company reporting lower-than-estimated quarterly profit, also wiped out its year-to-date losses.

Sitapati, who has spent nearly 22 years with the Indian unit of Anglo-Dutch giant Unilever, was instrumental in building the company’s foods and refreshments business as one of the largest in the country, which also included the merger and integration of GlaxoSmithKline Plc’s Indian consumer-health unit with Hindustan Unilever.

The new CEO’s rich Unilever experience will add meaningfully to Godrej’s strategic and execution capabilities, JM Financial Institutional Securities Ltd. analysts led by Richard Liu wrote in a note. They expect the appointment, along with a successful turnaround of Godrej’s Africa business, to “drive meaningful stock re-rating” over the medium term.