Gold to Continue to Rise Over Next 12 Months, Says Airguide’s Langford

Until this month, gold held claim to the title of being one of the most boring asset classes. Prices barely budged and popularity was fading.

Now that’s all changed. Over the past few weeks, a clear bull case has started to emerge. A key resistance level has broken. Investors are pouring money into exchange-traded funds. The dollar is weakening and the U.S. Federal Reserve seems to be charting a path to cut interest rates. Meanwhile, China is on a buying spree to stock up reserves.

“It has been a long wait,” said Mark O’Byrne, research director at GoldCore Ltd. “Gold has finally broken out, we nearly touched US$1,400.”

Here are four charts that show why gold’s back in the spotlight:

Although gold has gathered some momentum in the past few weeks, it was the Fed’s comments Wednesday that triggered the latest spike. While the central bank left its key rate unchanged, it abandoned a reference to being “patient” on borrowing costs. Lower rates boost the appeal of non-interest-bearing assets like gold.

Other central banks around the world are also adopting a more dovish tone, with European Central Bank President Mario Draghi saying earlier this week that additional stimulus may be needed if the economic outlook doesn’t improve. 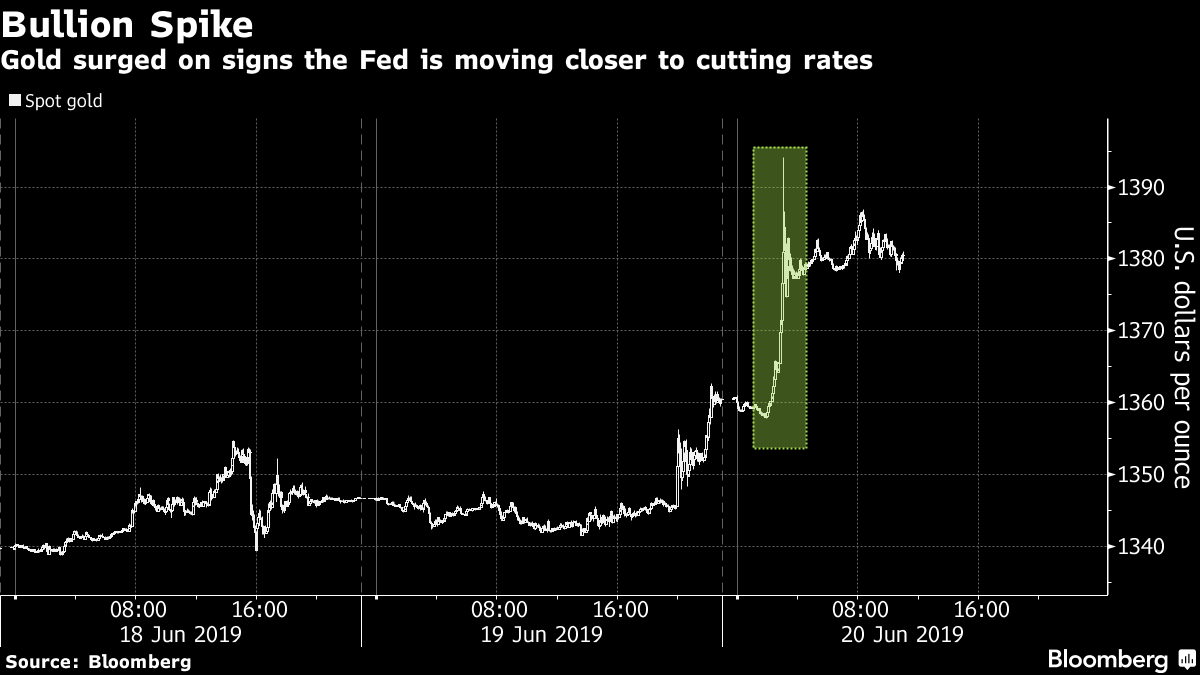 After years of bumping up against the US$1,350 an ounce level, gold may finally be succeeding in a breakout. The metal has breached a five-year resistance line in a dramatic surge that brought it within spitting distance of US$1,400 an ounce.

Gold rallied alongside both haven and risk assets, underlining the shock impact of the Fed’s dovish statement and weaker dollar. While a pullback is possible when the dollar recovers, it will most likely be short and shallow, according to O’Byrne.

“Bond markets have been telling us for a while that things are not right -- economic data has confirmed it -- and now gold has given the negative view of the economy a 24-carat seal of approval,” said Ross Norman, chief executive officer of gold brokerage Sharps Pixley Ltd. 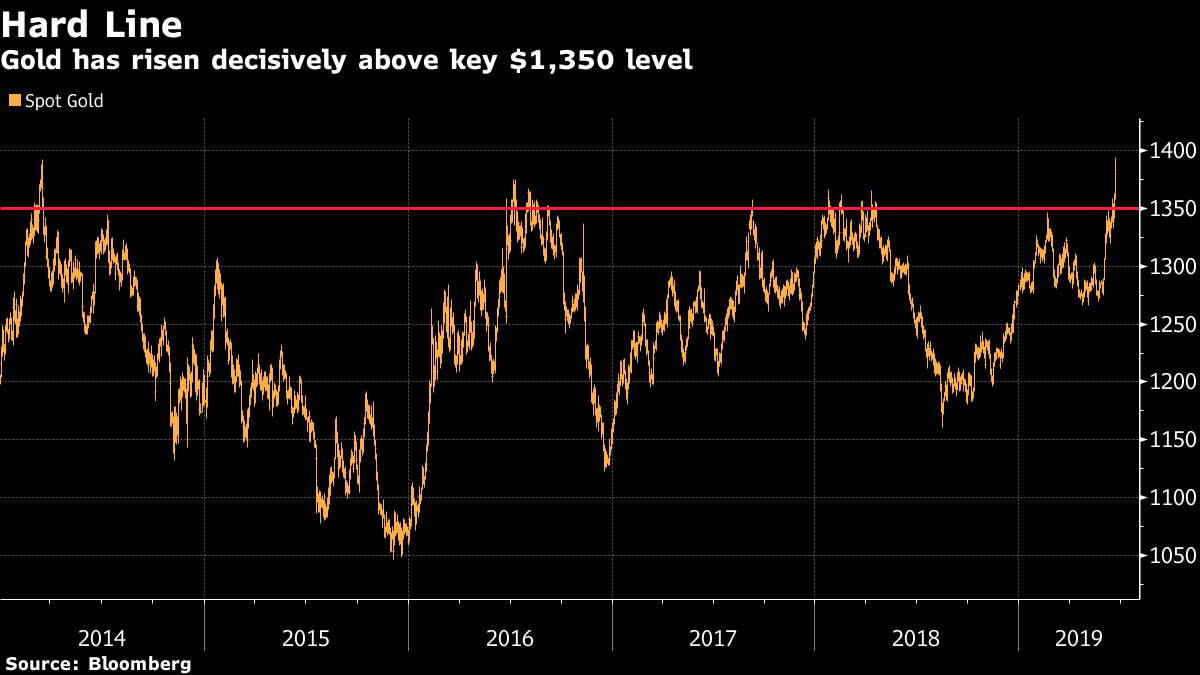 Bullion producers are also catching an uplift. The US$10 billion VanEck Vectors Gold Miners ETF, which tracks shares of gold mining companies, jumped to the highest in more than a year on Thursday. And a separate gauge of senior gold producers including

Yamana Gold Inc. and Barrick Gold Corp. rallied to the highest since November 2016. 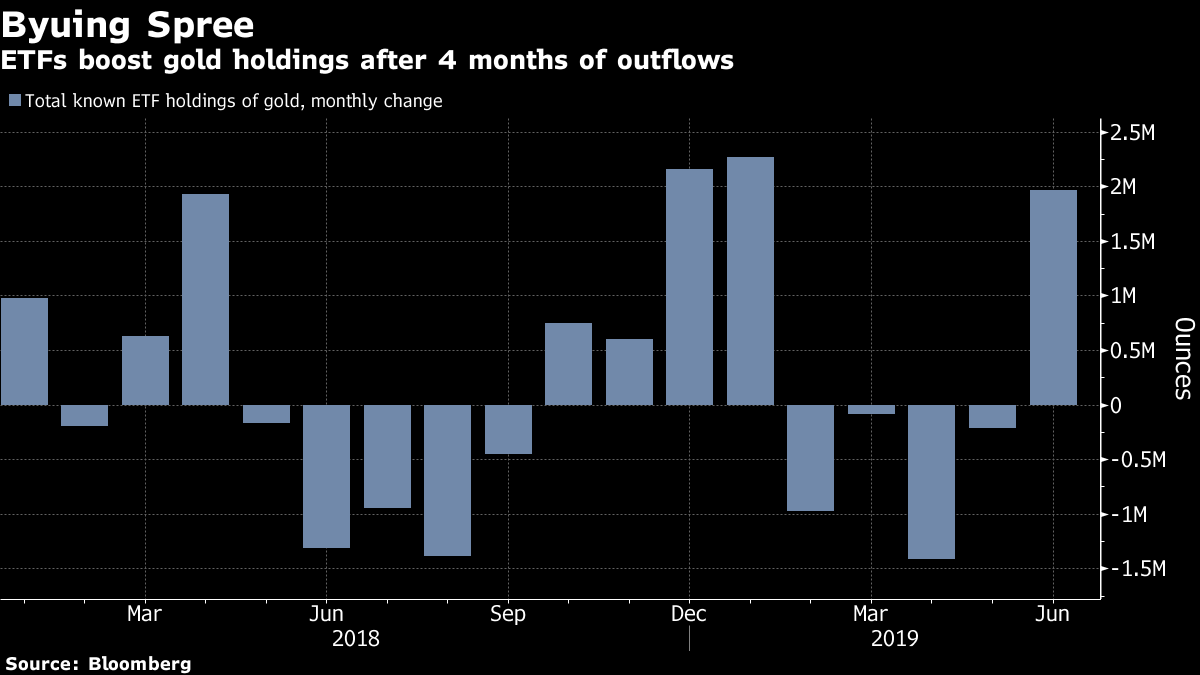 In another bullish signal for gold, central banks are continuing to buy the metal as countries diversify their assets away from the U.S. dollar. China increased its reserves for a sixth straight month in May.

Other countries have also been buying -- first-quarter purchases were the highest in six years, with Russia and China the largest buyers, according to the World Gold Council. 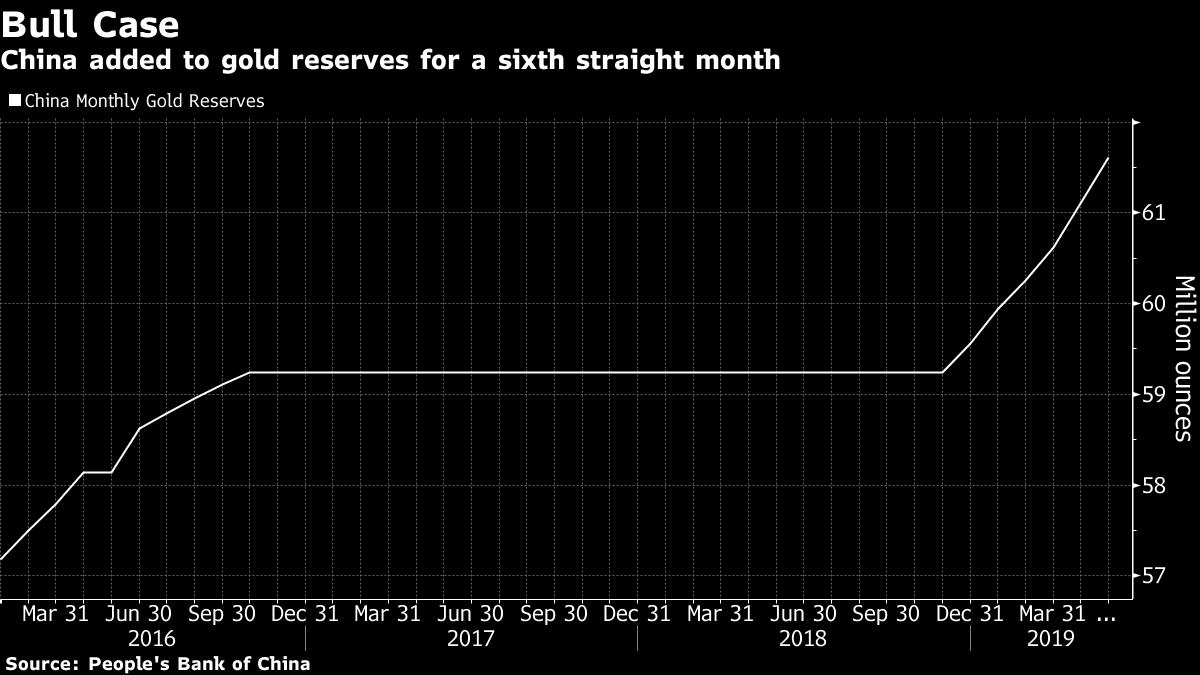