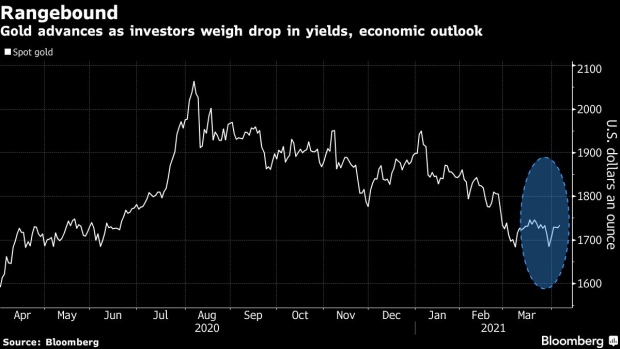 (Bloomberg) -- Gold advanced as investors weighed a drop in real yields against solid U.S. data that signaled a recovery from the pandemic.

Bullion rose as much as 0.4% after ending Monday little changed. Real yields fell for the third time in four sessions, buoying gold’s attractiveness. Still, data point to a rebound as more Americans are vaccinated against the coronavirus and fiscal relief takes hold. Figures showed U.S. service providers experienced the fastest growth on record in March, and stocks climbed to a record.

Bullion has clawed back some ground after dropping last week to near the lowest level since June, with recent movements largely being dictated by the direction of bond yields. Holdings in gold-backed exchange-traded funds are near the lowest in almost a year following sustained outflows.

“Gold prices are probably buoyed by falling real yields, as well as a weaker U.S. dollar,” said Margaret Yang, a strategist at DailyFX in Singapore. “A slight fall in real yields reduces the opportunity cost of holding non-yielding gold.”

Spot gold rose 0.3% to $1,733.94 an ounce at 10:26 a.m. in Singapore. Silver climbed, while palladium and platinum were both steady. The Bloomberg Dollar Spot Index was flat after dropping 0.3% on Monday.

Gold “needs to break above $1,750 before it can head higher,” said Stephen Innes, chief global markets strategist at Axi. “While bullion found strong hands in the $1,680s, the March lows, and has been relatively bullish, it is still far too early to determine that the trend has reversed higher.”

Traders were also assessing comments by Treasury Secretary Janet Yellen who reiterated her view that the $1.9 trillion U.S. pandemic-relief bill signed last month won’t stoke inflation, and suggested that low interest rates will continue to prevail in coming years. She also outlined the case for a harmonized corporate tax rate across major economies, in her first major speech on international economic policy.