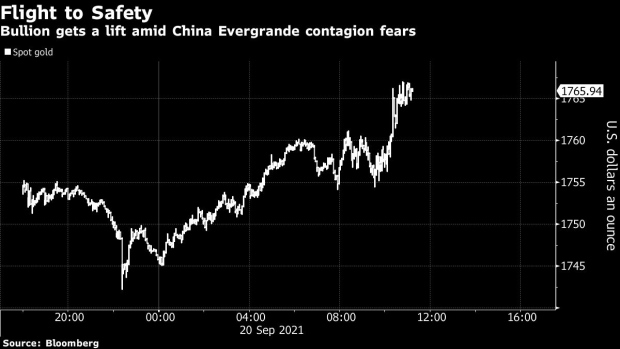 U.S. equities fell more than 2% as investor angst deepened over China’s real-estate sector and the Fed tapering. The dollar advanced to the highest level in nearly a month while Treasury yields slipped, boosting demand for non-interest bearing bullion.

“Gold is actually acting as gold. It’s getting flight-to-safety buying due to concerns how bad we’re actually getting with news over the weekend out of China,” said Bob Haberkorn, senior market strategist at RJO Futures. “If there’s a complete fallout, it’s going to reverberate over the markets.”

Evergrande will have interest payments on its two notes due Thursday, a key test of whether the Chinese real estate giant will continue meeting obligations to bondholders even as it falls behind on payments to banks, suppliers and holders of onshore investment products. Investors will also be looking for clues on how willing Xi Jinping’s government is to intervene and help the world’s most indebted property developer to prevent financial contagion from destabilizing the world’s second-largest economy.

Meanwhile, Federal Reserve Chair Jerome Powell faces a challenge at the central bank’s meeting that begins Tuesday as he leans toward paring back stimulus, while trying to avert speculation that such a shift presages interest-rate increases. Fed officials are expected to signal a start to scaling down bond purchases, and economists surveyed by Bloomberg see that hint followed by a formal announcement in November.

The traditional haven has lost 8% this year as central banks plot a course toward cutting the unprecedented monetary stimulus that was rolled out to rescue economies from the impact of the pandemic.

There’s further uncertainty in markets over the outlook for President Joe Biden’s $4 trillion economic agenda, as well as the need to raise or suspend the U.S. debt ceiling. Treasury Secretary Janet Yellen said the U.S. government will run out of money to pay its bills sometime in October without action on the debt ceiling, warning of “economic catastrophe” unless lawmakers take the necessary steps.

Palladium slumped to the lowest since June amid continued concerns that a global chip shortage at automakers is slowing demand growth from car catalytic converters, which are the biggest users of the emission-curbing metal.