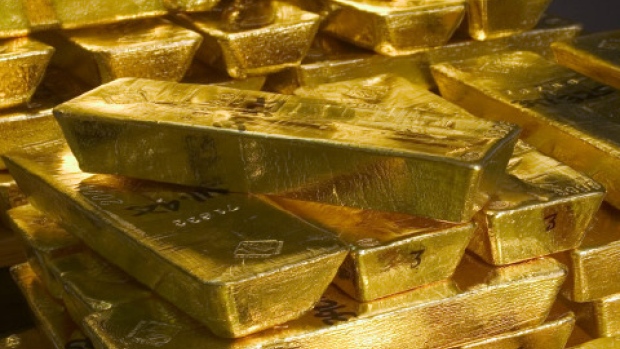 A stack of gold bars sits in a Goldcorp Inc. vault in Toronto, Ontario, Canada . , Bloomberg via Getty Images

CALGARY -- Investors in Canadian gold mining companies are being rewarded with higher dividends as gold prices settle near US$1,900 per ounce after setting record highs above US$2,070 in August.

Toronto-based Kirkland Lake Gold Ltd. is increasing its quarterly dividend by 50 per cent to 18.75 cents US a share in the fourth quarter after doubling it to 12.5 cents US in the first quarter this year.

It says its cash position increased by 58 per cent during the third quarter to US$848 million with no debt as it sold 332,000 ounces of gold at an average realized price of US$1,907 per ounce.

Last week, Yamana Gold Inc. announced it too would raise its quarterly dividend by 50 per cent, resetting it at 2.625 cents US per share in the fourth quarter.

The Toronto-based miner also raised its 2020 production guidance by three per cent to 915,000 gold equivalent ounces.

In September, Kinross Gold Corp. reinstated the dividend it cancelled seven years ago in view of its growing gold production and higher gold prices.

In a report last week, RBC commodity analysts said their base gold price outlook is unchanged despite the recent pullback blamed on a stronger U.S. dollar, with gold prices under its base case expected to peak at an average of about US$2,012 per ounce in the first quarter of 2021.

"Our main take-away from the dollar-driven pullback in gold prices is that it opens up room for gold to once again reach new highs," the report says.

"Such levels will likely be around our base case for Q4 2020 and Q1 2021 at the very least (mild gains that do achieve new records), and potentially even higher as in our high scenario ... if a second (pandemic) wave becomes a more significant problem in the eyes of the market."