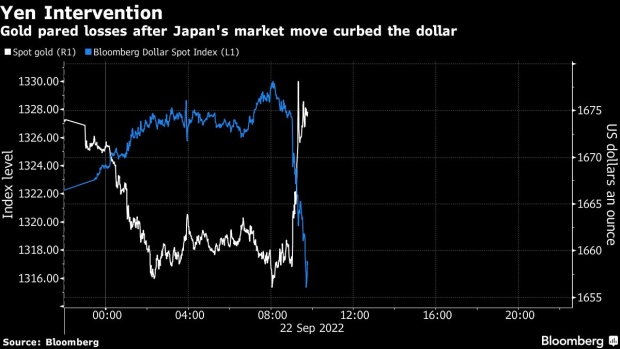 A mark of 999.9 fine sits on hallmarked 12.5 kilogram gold bullion bars stacked at the Valcambi SA precious metal refinery in Balerna, Switzerland, on Tuesday, April 24, 2018. Gold's haven qualities have come back in focus this year as President Donald Trump’s administration picks a series of trade fights with friends and foes, and investors fret about equity market wobbles that started on Wall Street and echoed around the world. Photographer: Stefan Wermuth/Bloomberg , Bloomberg

(Bloomberg) -- Gold fluctuated after Japan intervened in the foreign exchange market and central banks around the world followed the Federal Reserve with further monetary policy tightening.

Japan’s Ministry of Finance moved to halt a slide of the yen against the dollar, the country’s top currency official Masato Kanda said Thursday. After the Fed’s third consecutive large-sized rate hike, central banks in Switzerland, Norway and Britain announced hikes of their own as officials rush to rein in rampant price increases. The greenback fell after Japan’s intervention before clawing back its losses, while bond yields climbed. Bullion usually has a negative correlation with the dollar and rates as it’s priced in the US currency and doesn’t pay any interest.

The Fed’s rate hikes this year have weighed on bullion, with spot prices down 8.6% and investor holdings of exchange-traded funds -- a key pillar in driving gold prices to all-time highs in 2020 -- declining for four consecutive months as of August.

The US central bank stuck to market expectations with its move on Wednesday, though lifted forecasts on where rates would be at the end of the year. Earlier in the week, gold’s haven appeal had been bolstered by Russian President Vladimir Putin’s escalation of the war in Ukraine.

Still, the metal continues to trade near a two-year low, and risks sliding into a bear market thanks to the dollar’s relentless rise. The Fed’s monetary tightening cycle is outpacing others, including the Bank of Japan and the European Central Bank, which strengthens the greenback. That makes gold less attractive to buyers in foreign currencies.

“Gold was stuck between Putin and Powell and now we can add Kuroda to the mix,” said Ole Hansen, head of commodity strategy at Saxo Bank A/S. “Fresh longs will not rush back in until some tailwinds from lower yields and dollar begin to emerge.”

Applications for US unemployment insurance ticked up from an almost four-month low, suggesting demand for workers remains healthy despite an increasingly uncertain economic outlook.

Spot gold slipped 0.1% to $1,671.67 an ounce at 4:11 p.m. in New York after trading between a gain of 0.7% and a loss of 1.1% earlier. Bullion for December delivery gained 0.3% to settle at $1,681.10 on the Comex. The Bloomberg Dollar Spot Index was little-changed after earlier rallying to a record high. Spot silver and palladium gained, while platinum fell.