Gold should reach US$2,000 before year-end: President of Murenbeeld & Co.

Gold eased as Treasury yields climbed from near a three-month low and the dollar strengthened, paring moves made in the wake of a U.S. inflation report.

U.S. data on Thursday showed the consumer price index rose 0.6 per cent in May, more than forecast and the second-largest advance in more than a decade, but not enough to fan concerns of early monetary tightening by the Federal Reserve. Real yields eased after the data, boosting the appeal of non-interest bearing bullion, though they gained on Friday. 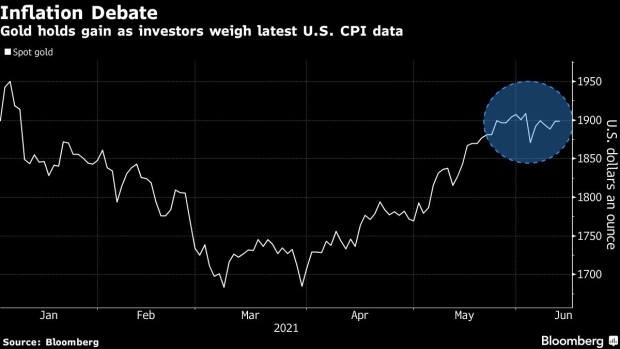 Bullion is holding near US$1,900 an ounce, with market reaction suggesting that traders are aligning with the Fed’s view that inflationary pressures are temporary and that any changes in ultra-accommodative policy will happen gradually. Investors will now turn their attention to the Fed’s June 15-16 meeting for guidance on its policy path.

“Despite the larger-than-expected U.S. CPI number, yields came under pressure following the report, which has provided support to gold,” said Warren Patterson, head of commodities strategy at ING Groep NV in Singapore. “We believe the Fed will likely continue to hold the view of transitory inflation at next week’s Federal Open Market Committee meeting.”

Spot gold lost 0.5 per cent to US$1,888.77 an ounce at 12:31 p.m. in London, after climbing 0.5 per cent on Thursday, and is heading for a small weekly loss. Prices reached the highest since Jan. 8 last week. Silver and palladium gained, while platinum declined. The Bloomberg Dollar Spot Index ticked higher.

Also on Thursday, European Central Bank President Christine Lagarde renewed a pledge to deliver faster bond buying even as officials acknowledged for the first time since 2018 that the euro-zone economy is no longer overshadowed by risks to its growth outlook.