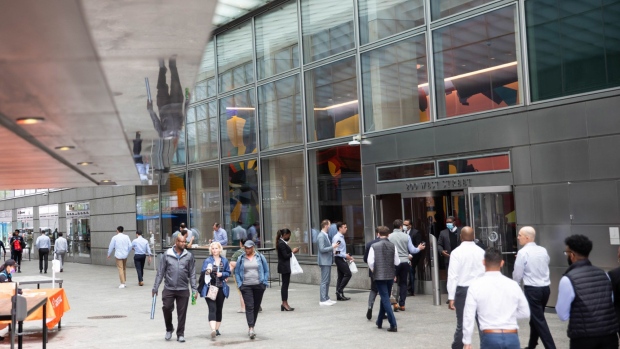 The more stringent safety measures, announced to staff on Tuesday, signals escalating caution at Goldman, which greeted the return of employees in June with live music and food trucks. Masks will be required starting Wednesday regardless of vaccination status, a company spokeswoman said. People who aren’t fully vaccinated by Sept. 7 will be expected to work from home, she said.

Goldman’s decision means all six U.S. banking giants have now instituted some sort of broad mandate that employees get shots or don masks inside buildings -- or in some cases do both.

The financial industry was at the vanguard of corporate America’s push to refill office towers after 2020’s pandemic lockdowns launched the work-from-home era. But the spread of the highly infectious delta variant in recent months has pressured firms to impose more stringent safety measures. The past few weeks have seen a flurry of internal announcements at firms all over Manhattan.

People with knowledge of Goldman’s deliberations said earlier this month that the firm had been leaning toward requiring masks in at least part of the bank’s towers. Then, last week, Morgan Stanley doubled down on its reliance on vaccinations, telling employees they would need to prove -- rather than just promise -- that they’ve had their shots to enter U.S. offices. Notably, Morgan Stanley doesn’t require masks in its New York headquarters, offering some semblance of a pre-pandemic work environment.