The Goldman Sachs Group Inc. logo is displayed in the reception area of the One Raffles Link building, which houses one of the Goldman Sachs (Singapore) Pte offices, in Singapore. , Photographer: Nicky Loh/Bloomberg

Goldman Sachs Group Inc. has effectively bowed to pressure from the continuing rally in U.S. stocks and abandoned its call for another steep sell-off.

“The powerful rebound means our previous three-month target of 2,400 is unlikely to be realized,” the strategists wrote. “Monetary and fiscal policy support limit likely downside to roughly 10 per cent.

Investor positioning has oscillated between neutral and low and is a possible 5 per cent upside catalyst.”

The shift came just after JPMorgan Chase & Co.’s strategists shifted in the other direction -- reining in their bullish outlook. 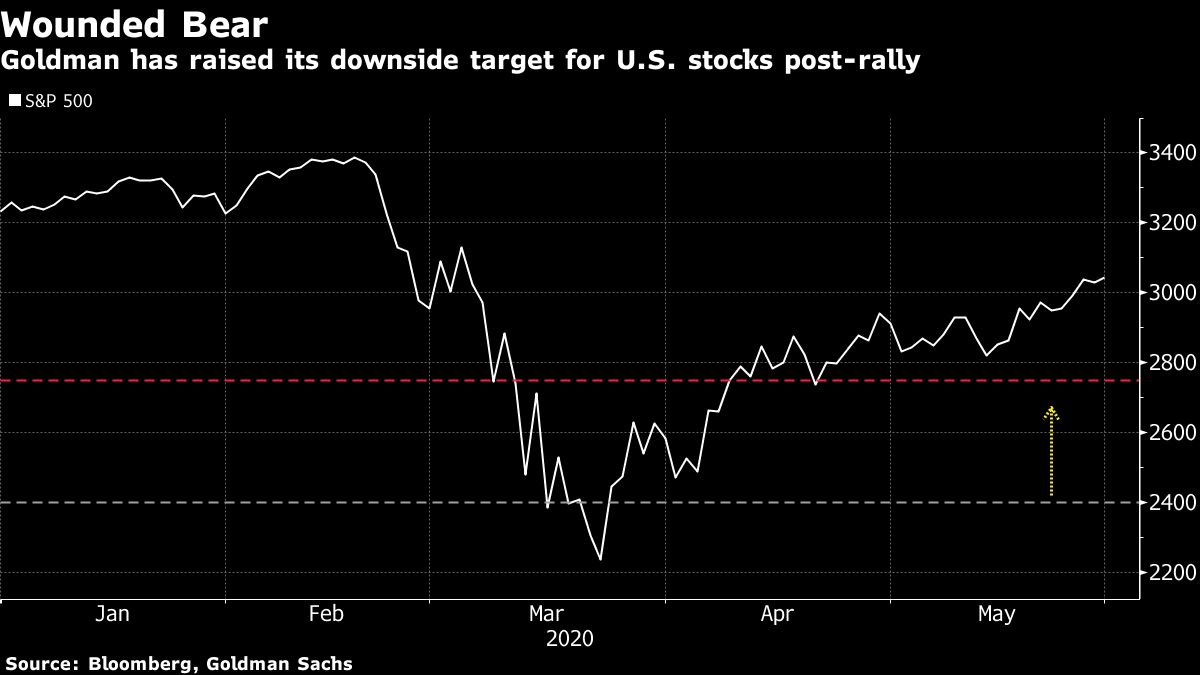 JPMorgan’s Marko Kolanovic warned about rising U.S.-China tensions in a note May 28.

Goldman’s strategists maintained their year-end target of 3,000 for the benchmark U.S. stock gauge.

Goldman continues to argue that short-term returns are skewed to the downside -- “or neutral at best” -- thanks to the risk of an economic, earnings, trade or political “hiccup” to the normalization trend.

A broader participation in the rally would be needed for the S&P 500 to move meaningfully higher.

The S&P 500 has climbed 36 per cent from its March 23 low, helped by massive fiscal and monetary support, mega-cap outperformance and optimism about the economy restarting, according to Goldman.

Last month it argued fear of missing out was a key driver of the rebound in stocks.