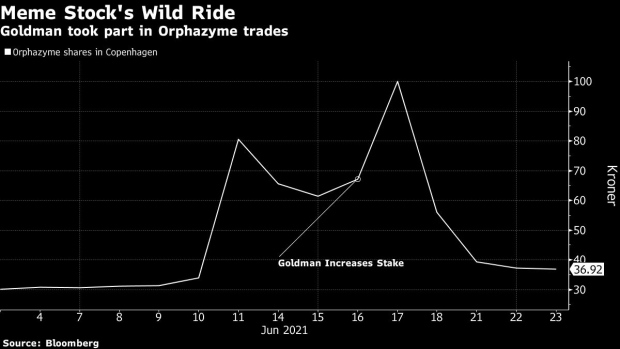 Orphazyme A/S, a small Danish biotech firm, said on Wednesday the Wall Street firm had a stake that exceeded the 5% threshold that triggers a filing, and then quickly reduced its holding to below that level last week.

Goldman’s holding was 5.58% as of June 16, and less then 5% a day later. The bank hasn’t previously appeared as an investor in regulatory filings for Orphazyme.

Orphazyme morphed into a meme stock on June 10. After building a sudden fan base on social media platforms such as Reddit, the company’s American depositary shares soared almost 1,400% at one point during U.S. trading hours. Last week, the stock’s share price crashed after it failed to win regulatory approval for a key treatment.