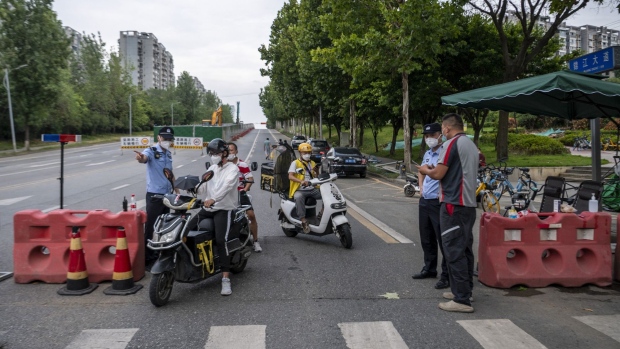 This photo taken on September 1, 2022 shows police officers checking information on a road amid restrictions due to an outbreak of the Covid-19 coronavirus in Chengdu, in China's southwestern Sichuan province. Photographer: -CNS/AFP/Getty Images , Photographer: -/AFP

(Bloomberg) -- Goldman Sachs Group Inc. cut its 2023 economic growth forecast for China sharply, predicting Beijing will stick to its stringent Covid Zero policies through at least the first quarter of next year.

Gross domestic product will probably increase 4.5% in 2023, down from a previous projection of 5.3%, Goldman’s economists led by Hui Shan wrote in a report. There was no change to the prediction of a 3% expansion this year.

China is unlikely to begin reopening before the second quarter of next year as it will first try and ensure higher vaccination rates for the elderly, more manufacturing of cheap and effective Covid pills and other conditions are in place, Goldman said. The authorities may also want to wait until after the Lunar New Year peak travel season and next March’s parliament session when the reshuffling of government officials is completed, before exiting the Covid Zero strategy, the economists wrote.

Analysts have been steadily downgrading forecasts for China’s growth this year and next as the outlook for the economy is overshadowed by repeated lockdowns to contain Covid outbreaks, a persistent property crisis, and slowing exports. The median forecast in a survey last month was for the economy to expand 3.5% this year and then grow 5.2% next year.

The volatile pattern of growth so far this year shows just how susceptible the economy is to stringent movement curbs. The economy was almost driven into contraction in the second quarter after Shanghai and other cities locked down, and the anemic recovery last month followed a July flare-up in cases that again pulled growth down.

Any easing of Covid restrictions will probably be followed by a jump in infections, reduced mobility and possible supply chain disruptions, which will curb economic activity, the economists said.

“China is likely to experience a surge in infections upon a full reopening given the lack of infection-induced immunity and the high transmissibility of omicron,” they said. “Therefore, we would expect a modest drag on growth in the first three months of reopening followed by a steep recovery thereafter.”

On the property market, Goldman said Beijing’s mantra of “housing is for living in, not for speculation” is unlikely to change if President Xi Jinping secures the widely expected third term at the Communist Party’s congress in October. Major easing of property restrictions is unlikely, the economists said.

“Shrinking the real estate sector is the ultimate policy goal for the top leadership,” Goldman said. “We continue to expect a sizable drag from the property sector to GDP growth this year and beyond.”

Policy makers are expected to keep the “conservative mindset” of controlling leverage and financial risks and maintain the approach of “no flooding of easing measures”, the economists said. Fiscal support may also wane, with the augmented deficit seen narrowing 2 percentage points next year after widening by 3 percentage points this year, according to the note.