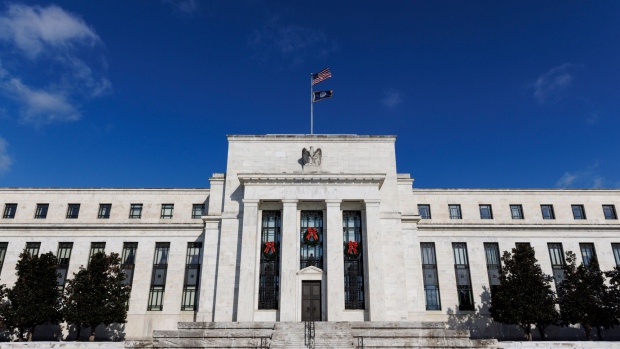 (Bloomberg) -- The risk to equities of a “growth shock” is increasing, according to Goldman Sachs Group Inc. strategists.

Ahead of a Federal Reserve meeting this week that’s expected to point toward a rate hike in March, the strategists warned that sharp monetary tightening to tame inflation could eventually have knock-on effects on economic activity, hurting stocks.

“There is the risk that a rates shock triggers a growth shock,” Christian Mueller-Glissmann and his colleagues wrote in a note after Monday’s dramatic sessions for European and U.S. markets. “That risk looks higher, as inflation pressures are much higher than since the 1980s.”

U.S. futures dropped on Tuesday after Monday’s late rally as traders awaited more clarity from the Fed on the path of rate hikes. Bets on a more aggressive stance by the central bank have triggered a rout across both sides of the Atlantic this month, and a rotation away from pricey stocks valued on future growth expectations.

With the post-pandemic economic rebound now past its peak, and central banks about to turn off the taps of abundant liquidity, companies have been giving more guarded guidance for the months ahead, adding to signs that the explosive earnings growth that fueled the equity rally may be nearing its end.

BlackRock Investment Institute strategists warned on Monday that “monetary policy cannot stabilize both inflation and growth: it has to choose between them.” Eventually, central banks will have to live with higher prices, given the cost to growth of suppressing inflation, the strategists led by Jean Boivin wrote in a note.

If anything, markets are not yet worried enough about the growth outlook, and are still too focused on rates, according to HSBC Holdings Plc strategist Max Kettner.

“As we move further along in the first half, I do think it will become increasingly clear that growth momentum will have slowed materially, and that is not great for risk assets,” Kettner said in written comments. The slowdown “might take off some of the heat of rate hike expectations, but particularly cyclical asset classes won’t like this.”