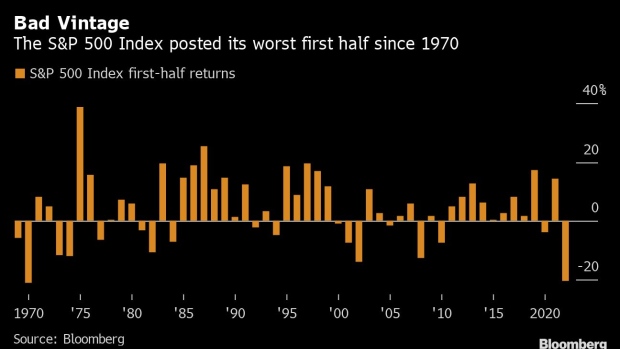 A monitor displays S&P 500 market data during the Sweetgreen initial public offering (IPO) in front of the New York Stock Exchange (NYSE) in New York, U.S., on Thursday, Nov. 18, 2021. Sweetgreen Inc., perhaps the most well-known of the salad chains, is capitalizing on the reopenings, and the booming market for new listings, with an initial public offering that’s surpassed expectations. Photographer: Michael Nagle/Bloomberg , Bloomberg

(Bloomberg) -- The risk of a renewed selloff in equity markets is still high as investors are only pricing a mild recession, according to Goldman Sachs Group Inc. strategists.

“Much of the valuation de-rating this year has been due to higher rates/inflation,” strategists led by Christian Mueller-Glissmann wrote in a note dated June 30. “Unless bond yields start to decline and buffer rising equity risk premiums due to recession fears, equity valuations could decline further.”

Stock markets globally have just experienced one of their worst six months on record as stubbornly high inflation and hawkish central banks raised the specter of a sharp economic slowdown. The US S&P 500 Index had its worst first-half performance since 1970, losing over $8 trillion in market capitalization.

With the TINA mantra -- There Is No Alternative to equities -- that has been fueling the bull rally in stocks now over amid sticky inflation and rising bond yields, investors are facing “TARA (There Is A Reasonable Alternative),” Mueller-Glissman said. “As central banks are busy fighting inflation they could struggle to buffer the business cycle.”

Corporate earnings are also likely come under pressure in the second half of the year, the strategists said, as margins face the test of surging prices and weakening consumer sentiment.