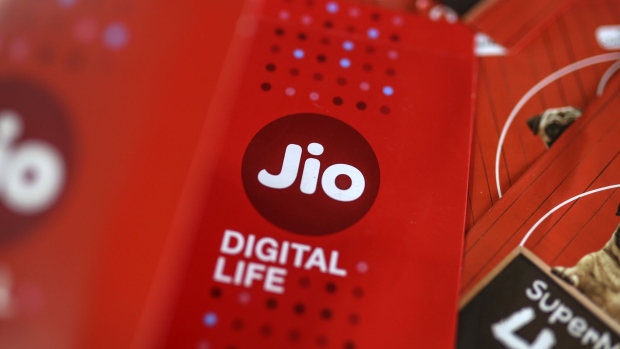 Sim card packets for Reliance Jio, the mobile network of Reliance Industries Ltd., are displayed for a photograph at a store in Mumbai, India, on Sunday, Jan. 19, 2020. Reliance Industries, India's biggest company by market value, posted a 13.5% jump in quarterly net income as growth in telecom and retail business helped outweigh a slump in petrochemical operations , Photographer: Dhiraj Singh/Bloomberg

Google is in advanced talks to buy a stake in Reliance Industries Ltd.’s digital arm Jio Platforms Ltd., according to people familiar with the matter.

The U.S. technology company has been discussing an investment of about US$4 billion, the people said, asking not to be identified because the information is private. An announcement could come as soon as the next few weeks, according to the people.

Details of the potential deal could change, and negotiations could still be delayed or fall apart, the people said. Representatives for Google and Reliance didn’t immediately respond to requests for comment.

Google would join Facebook Inc. and a slew of private equity firms piling into billionaire Mukesh Ambani’s technology venture, which has already attracted more than US$15 billion of investments in just a few months. An arm of Qualcomm Inc. was the latest in Jio’s growing list of high-profile investors, who also include Silver Lake Partners and Mubadala Investment Co.

Shares of Reliance Industries pared losses in Mumbai on the Bloomberg News report. The stock slipped about one per cent as of 2:42 p.m. local time, outperforming a 1.8 per cent decline in S&P BSE Sensex index. Reliance shares have more than doubled since a low in March to a record on investments into Jio.

On Monday, Google said it plans to spend US$10 billion over the next five to seven years to help accelerate the adoption of digital technologies in India. The amount could be put into partnerships and equity investments among others.

Sundar Pichai, who was born in the country and is now chief executive officer of parent Alphabet Inc., said the outbreak of the coronavirus has made clear the importance of technology for conducting business and for connecting with friends and family.

Google, founded in 1998 in Silicon Valley, entered India six years later with offices in Bangalore and Hyderabad. The India business has since grown into one of the company’s most important. The country now has more than 500 million internet users, second only to China, with growth that has drawn all the American technology giants.

In the last decade, Google has successfully launched several products in India, including a Google internet Saathi service to bring women in rural areas online and its popular Google Pay service.

--With assistance from P R Sanjai