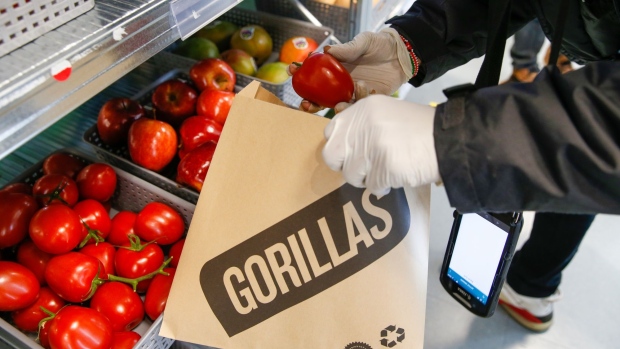 A worker fulfills orders at a Gorilla Technologies GmbH 'dark store' in Shoreditch in London, U.K., on Thursday, May 20, 2021. German food delivery company Delivery Hero SE plans to invest in grocery startup Gorillas as part of a $1 billion funding round, according to people familiar with the matter. , Bloomberg

(Bloomberg) -- Gorillas Technologies GmbH will likely be valued at about $1.7 billion if a deal to be acquired by Istanbul-based delivery startup Getir goes through, and could face another round of job cuts, people familiar with the matter said.

Getir is currently in advanced talks to buy German rival Gorillas in a deal consisting of equity and $100 million in cash, the people said. Bloomberg previously reported on the negotiations in October. Gorillas, which quickly attracted capital after it was founded in 2020, has had to slash staff and pull back from some of its markets after rapidly burning through capital by offering money-losing services, such as grocery delivery within minutes.

Last year, Gorillas raised funds valuing the company at about $3 billion but has been exploring its options after investors became more cautious over the industry’s path to profitability.

The scale of the layoffs are unclear, and no final decisions have been made, the people added, asking not to be named because the information is not public. Gorillas reduced its office staff by half in a drastic scale-back in May.

Read more about Gorillas exploring its options, including deals with delivery rivals.

Thousands of tech jobs have been eliminated globally in the last few months, with some of the largest companies including Meta Platforms Inc. and Amazon.com Inc. announcing significant cuts to their workforces in anticipation of spiraling inflation and slowing consumer spending. Delivery companies like Gorillas have been hit particularly hard after the surge in popularity that they enjoyed during the Covid-19 lockdowns fell off and growth slowed.

Read more about instant grocery delivery darling Gopuff and its struggles on the pat to profits.

The combination with Gorillas would give Getir, which is backed by Mubadala Investment Co. and Sequoia Capital, scale in key European markets including the UK and Germany.

Gorillas had previously held talks with a number of competitors about the prospects for a merger or sale of its business, people familiar with the matter said previously. The industry is consolidating as companies emphasize a shift to profitability. Getir agreed to buy UK startup Weezy in late 2021, while Gorillas acquired France’s Frichti earlier this year.

--With assistance from Agatha Cantrill.