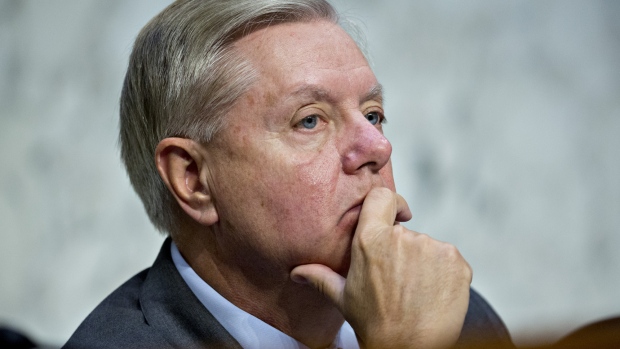 "Until you change these magnets, these laws, no wall is going to stop the flow -- I think he got that," the South Carolina Republican told reporters as he introduced administration-backed asylum legislation. "You are going to have to get Democrats in the room. And this is the time for the ‘Tuesday Trump’ to show up.’"

"Tuesday Trump" is a reference to a previous effort to reach an immigration compromise, when Trump on a Tuesday appeared to back a deal Democrats would support, but walked away from it by the end of the week.

Graham warned that Trump "will own this problem" if he doesn’t agree to some asylum law changes that Democrats want to dissuade families from leaving Central America in the first place.

"You literally are going to have multiple millions of people coming from Central America in the next two or three years unless you shut off the faucet," Graham said.

Graham said his legislation would prohibit Central Americans from being able to seek asylum at the border. Instead, they would have to apply in Mexico or at consulates in their home countries.

The Obama administration had set up a program allowing Central American minors to make refugee requests in other countries’ consulates but the Trump administration shut it down.

Graham also wants to add 500 immigration judges and increase detention time for undocumented families to a maximum 100 days from the current limit of 20 days.

Dozens of Democratic senators, including Senate Minority Leader Chuck Schumer and No. 2 Democrat Dick Durbin, re-introduced legislation that would create a new refugee processing program for families and children in Central America but wouldn’t block people from making claims at the border.

Democrats also would increase aid to Central American countries, an idea Graham said he could support as part of a package.

Durbin said he doesn’t support Graham’s legislation but commended him for proposing hearings and committee action.

"Let’s debate it. Let’s see what we can agree on," Durbin said. He said he wants a deal to address Obama-era protections for so-called Dreamers -- people brought to the U.S. illegally as children. Trump is waging a court battle in an effort to cancel the program.

"If we’re going to be talking about addressing these crises, let’s put them all on the table," the Democratic senator said.

Graham said he would be open to including protection for Dreamers. Trump hasn’t indicated that he would, however.

Graham said his proposal is aimed at reaching a deal with Democrats and becoming law. A broader immigration overhaul outlined to Republicans yesterday by Trump senior adviser Jared Kushner isn’t designed to become law, Graham said, but instead to unite Republicans.

Graham said he can support the main elements of the Kushner plan, which are similar to previous comprehensive immigration overhauls, including border security and merit-based immigration.

But the proposal is unlikely to attract the Democratic votes needed to pass because it doesn’t address the millions of people in the U.S. illegally, including the Dreamers.

--With assistance from Michaela Ross.

To contact the reporter on this story: Steven T. Dennis in Washington at sdennis17@bloomberg.net