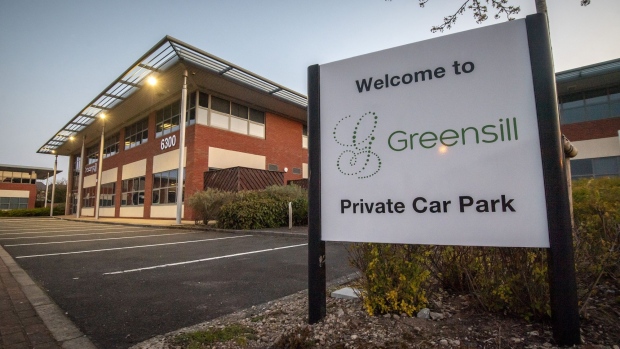 A private parking sign at the Greensill Capital (U.K.) Ltd. offices in the Daresbury Park business estate near Warrington, U.K., on Thursday, April 15, 2021. Critics have accused the ruling Conservative party of "sleaze" and called for an overhaul of the U.K.'s lobbying rules after it emerged former premier David Cameron lobbied ministers on behalf of the now insolvent finance firm Greensill Capital. Photographer: Anthony Devlin/Bloomberg , Bloomberg

Grant Thornton Ltd. has told creditors of Greensill Capital it expects to charge almost 21 million pounds ($28.9 million) in its first year as administrator of the collapsed lender’s U.K. operations, the Financial Times reported.

The fee estimate, contained in a filing at Companies House this week, has risen by almost a third from a previous forecast and represents close to 5% of the accountant’s entire U.K. annual revenues, the FT reported.

The estimate includes 12.1 million pounds in fees for more than 22,000 hours of work in the first six months of the administration, or an average of 545 pounds per hour, according to the newspaper.