Revisiting the grocery business model, as stores look to phase out 'hero pay' for workers

Grocery stores are doing whatever it takes—including deploying robots—to save their lucrative salad bars from becoming a relic of pre-pandemic shopping.

In a frantic push to ease skittish consumers and shore up sales, some chains are tossing prepackaged salads into the bar’s now-empty bins, a stopgap measure that’s easy to do, but eliminates the customization—extra onions, less croutons, etc.—that shoppers crave. Publix Super Markets Inc. placed an employee next to the bar to take orders during peak hours, but that full-service option slows things down and adds labor. Others are renting space to foodservice chains, which eats into profit and cedes control.

“It’s a huge question, and no one really knows,” says Gabrielle Rosi, an expert in store design who spent more than 20 years at Whole Foods Market before leaving in April. “You have these massive metal pieces just sitting there. It’s a big challenge.”

Salad bars drive store visits, especially during midday lulls, and their profit margins can be attractive because they don’t require much labor and shoppers pay by the pound. More than 90 per cent of supermarkets have them, but sales by volume have been declining for several years, according to data-tracker IRI, as salad-centric restaurant chains, like Sweetgreen, Chopt and Saladworks, have expanded and lured away some of that kale-loving crowd. Even before the pandemic, some grocery-store shoppers considered salad bars unhygienic. (Sneeze guards can only guard against so much.)

Now they face an existential threat. More than 80 per cent of consumers said grocery-store salad bars are too risky, according to a survey from researcher Datassential. Retailers have turned maximizing selling space into a science, and they aren’t about to let an underperforming part of the store wallow for long. But what to replace them with? 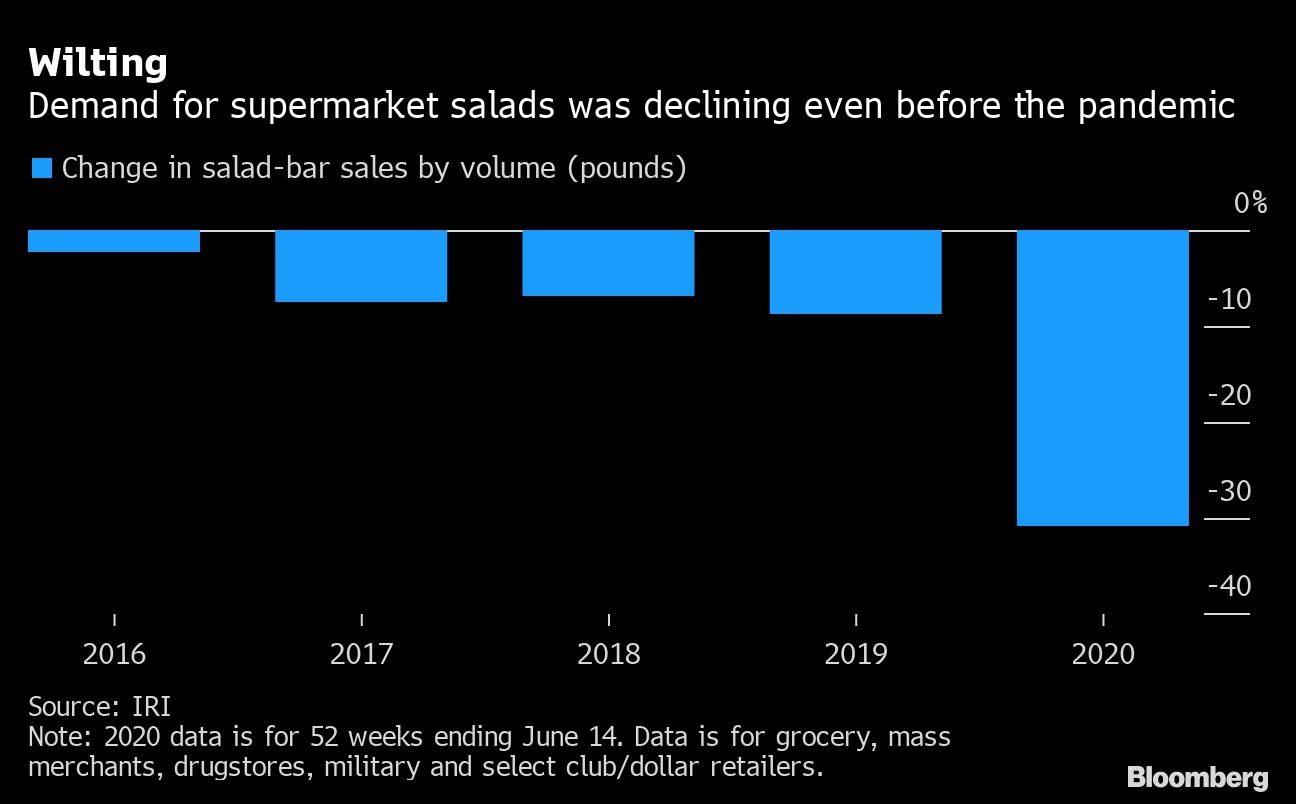 Rival Albertsons Cos. is also experimenting with various options like prepackaged salads. “It’s a difficult situation,” Albertsons CEO Vivek Sankaran said, adding that “it will be a long time” before self-service makes a comeback.

Before the virus hit, the salad bar at a Heinen’s supermarket could handle as many as 150 salads an hour during the lunch rush. Those sales accounted for 2.5 per cent of the Ohio-based chain’s total business, which is geared heavily towards prepared foods.

Then the self-service bars went dark on March 14 due to concerns that they transmitted the virus. Heinen’s asked its in-house chefs to bulk up its small offering of prepackaged salads, and it now offers 18 varieties, all nestled inside the now-vacated salad bar space, along with individually-packaged items like salmon, chicken and fruits, so shoppers can mix and match. Heinen’s Chief Innovation Officer Chris Foltz also took the opportunity to try something totally new—a 6-foot-tall, 750-pound robot named Sally.

Pradeep Elankumaran, co-founder and CEO of Farmstead joins BNN Bloomberg to discuss why the grocery industry is having challenges with online orders.

Costing US$35,000, Sally comes from a Bay Area startup called Chowbotics and will make its debut in Heinen’s Pepper Pike, Ohio location later this week. Sally looks like a vending machine, holds 22 separate ingredients (including dressings) and tracks the nutritional profile of a salad as the shopper builds it on a touchscreen (a mobile ordering app is in the works for those who don’t want to touch anything).

Heinen’s version of Sally will dish out five standard salads at first for US$6.99 each, like Cobb and Chicken Caesar, but shoppers can customize and the menu will get more adventurous. Ultimately, Sally could dish out soups, grain bowls, parfaits and even full meals.

While Sally can’t serve as many customers as before—Foltz expects it to deliver 30 to 35 salads an hour—the machine will pay for itself in nine months. Another benefit is that Heinen’s can now include pricier options like salmon, which it couldn’t do in self-service stations because shoppers would gorge on it. Sally, in contrast, controls how much of the most expensive salad ingredients get used.

“Now, the robot can manage that,” he says. “So from a cost perspective, it’s better.”

Other workarounds are more simple. Amtekco Industries Inc., an Ohio-based manufacturer of supermarket salad bars that can cost upwards of US$75,000 a pop, has a solution. Its engineers fashioned an insert that can hold prepackaged salads and other foods, turning a salad bar into a chilled display case. The so-called “cold well conversion kit” costs just US$200 and “we have sold a lot of them,” says Bruce Wasserstrom, Amtekco’s president. Over the past month or so, a six-person team inside the company has also been hard at work on what Wasserstrom dubs “the future of food bars,” but he won’t divulge details.

Salad bars made supermarkets a “destination.”

Generally, supermarket executives aren’t great at predicting the future. Food retail is a risk-averse industry by nature, with thin profit margins, high labor costs and the constant threat of a salmonella outbreak hanging over operators’ heads. The pandemic has been great for supermarket sales, but nobody knows if the nation’s recent rediscovery of home cooking will be permanent. So for grocers, having a wide selection of high-quality prepared foods is important.

Supermarkets first adopted salad bars in the early 1980s after seeing restaurants successfully introduce them a decade earlier. While they add complexity to a grocery store’s operations—wilted lettuce has to get thrown away, and food temperatures need to be constantly monitored—salad bars have boosted customer traffic and are visually appealing, especially compared with the boring cans of soup in the aisles.

Food bars also made supermarkets a place where customers could linger and eat, meeting friends and co-workers, rather than just dash in and out. At upscale chains like Whole Foods and Wegmans Food Markets, the self-service stations became big attractions, inspiring grocers to carve out even more space for sit-down cafes and restaurants, inspiring the term “grocer-ant.”

“We became a destination,” said Bobby Ukrop, former CEO of Ukrop’s Super Markets, a Virginia-based chain that opened its first salad bar in 1984 and was later acquired by Europe’s Ahold Delhaize. “Then in 1989, we opened another store with a grill and a cafe with 50 seats. But the salad bar is where it started.”

Today, some supermarkets outsource their upscale prepared foods, like sushi and barbecue, to foodservice specialists. Saladworks, a Pennsylvania-based chain with 106 locations in the Northeast, now wants to replace salad bars with made-to-order stations. It’s got a few in place at ShopRite, a chain owned by Wakefern Food Corp., and plans for about 25 more. It’s also close to landing two other national chains as partners. But it’s not for everyone: Heinen’s Foltz says he nixed this option because a foodservice partner would take up too much valuable real estate in the store, while also grabbing most of the profit.

“Retailers are incredibly focused on sales per square foot,” Roddy said. “They are sitting on these salad bars, and they will not wait long to replace them.”