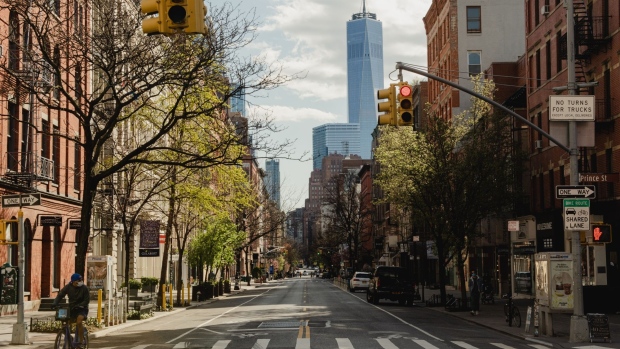 A person wearing a protective mask rides a bicycle along a nearly empty West Broadway in the SoHo orders to curb the spread of the virus , Bloomberg

Turned out of bouncy castles and houses of worship, blocked from working and shopping and dining, homebound Americans are starting to crack under orders that health experts insist are keeping them safe from the new coronavirus.

In Kentucky, Governor Andy Beshear’s demand that travelers self-isolate has led to a challenge from the state’s own attorney general. In Illinois, Representative Darren Bailey won a court order exempting him -- and him alone -- from the state’s distancing regulations, a ruling that Governor J.B. Pritzker called “a dangerous precedent.” Newark, New Jersey, police have issued 1,500 summonses to people defying executive orders on gathering.

Whether through ignorance, impatience, or live-free-or-die defiance, some Americans are choosing this particular moment to do whatever it is they ordinarily do. Others, rule-followers confined for weeks on end, are letting their guards and their masks down and forging a new relationship with risk.

“We have not beaten this disease yet, and we’re going to take a tough line and hold the line until we do -- this is the only way to come back safely,” New York City Mayor Bill de Blasio said Thursday. The city was deploying 1,000 workers, including police and firefighters, to issue summonses carrying fines and to arrest flagrant social-distancing violators, he said.

The U.S., with more than 1 million coronavirus cases and 61,000 deaths, is the global hot spot. Absent a virus vaccine or antidote, the U.S. Centers for Disease Control and Prevention endorses social distancing to slow the outbreak. But a nation conceived in a face-slap to the British monarchy and cultivated on frontiers lousy with bears has a problem with mandated queues for a shot at rationed toilet paper and increasingly scarce meat.

Lockdown protests orchestrated by right-wing groups have featured men in revolutionary tricorn hats -- as well as modern tactical gear and assault rifles. Some governors are listening: By Monday, roughly half the U.S. will have reopened businesses on some scale despite the possibility of renewed outbreaks.

According to a Kaiser Family Foundation poll released April 24, 80 percent of Americans supported sheltering guidelines, and the same percentage said it can continue to stay home for at least another month. Still, human nature draws us outside and together no matter what politics dictates.

Rene Gonzalez, 41, of Jersey City, New Jersey, headed to a pharmacy on Wednesday wearing a mask and goggles, “looking like a beast,” she said by telephone.

She could handle that sort of thing, she said, as just another part of keeping her husband and children -- 12, 10 and 8 years old -- safe. But she was jolted by a headline saying that a vaccine might be available in January.

“That alone will give you a panic attack, because January is the best-case scenario,” said Gonzalez, the founder of Bambino Chef, a kids’ cooking school.

Her state’s governor, Phil Murphy, has enforced a hard line and refers to violators as “knuckleheads.” Police in New Jersey have issued summonses to people piling into a kids’ inflatable bouncy castle, and boozing it up around a bonfire.

In New York, with the nation’s most virus cases, police Tuesday issued summonses to 12 mourners among the estimated 2,500 at Rabbi Chaim Mertz’s funeral in a Brooklyn neighborhood hit hard by Covid-19.

Frank Farley, a Temple University psychology professor, said many Americans “resist rules, exude confidence, make up their own mind and flourish in the realm of uncertainty.”

“These folks do not have a death wish -- they have a life wish,” Farley said in an email.

It’s an impulse that some may not recognize in little acts of disobedience, such as bringing back the babysitter, disregarding one-way grocery-store aisles or browsing for fripperies at businesses that have been allowed to remain open.

Michigan and Vermont have ordered stores including Walmart, Costco and Target not to sell nonessential items. Summit County, Colorado, took a similar step, as did Howard County, Indiana, which cited reports from retail employees “who witness customers congregating at the store because they are bored at home and come to the store to browse and buy only nonessential goods, causing longer lines and more people in the stores.”

Velvet Glove
The resisters have their champions. President Donald Trump on Twitter on April 17 urged followers to “liberate” Virginia, Michigan and Minnesota, states all led by Democratic governors. On Wednesday, Elon Musk, whose Fremont, California, factory has been closed since March 24, joined the fray with a Tweet: “FREE AMERICA NOW.”

Governors have to calibrate approaches that mix persuasion and coercion.

Mass frolics in Orange County amid a heat wave drew thousands and led Governor Gavin Newsom to close beaches there, effective Friday. The gatherings, he said, were an example of “what not to do.”

Also Friday, Murphy said New Jersey state parks would open Saturday, a month after he closed them because of visitors’ disregard for social distancing.

“This weekend will be a huge test for all of us,” Murphy said at a Trenton news conference. “We are trusting in you.”

For some, the baby steps toward normality aren’t fast enough and courts are the answer.

Good Morning, Judge
In Kentucky, three members of a church filed a federal lawsuit to gather, even as virus cases in the state have climbed. Beshear, the Democratic governor, on April 15 said virtual and drive-in services are options, and asked people “to choose one of the versions that doesn’t spread the coronavirus.”

In another lawsuit, over Beshear’s travel restrictions, Republican Attorney General Daniel Cameron split with him. “The sweeping scope of his travel ban, if left unchecked, creates a dangerous precedent,” Cameron said in a statement.

Illinois Governor Pritzker has been a particular target, even though starting Friday his modified order will allow some businesses such as garden centers and golf courses to reopen. A lawsuit filed Wednesday by state Representative John Cabello challenged his stay-home orders, and in a separate case, a circuit court judge this week gave Bailey, Cabello’s fellow lawmaker, a temporary exemption.

A church sued Pritzker on Thursday, claiming that he violated its First Amendment rights, and also noted that some sheriffs are refusing to enforce the distancing orders. On Friday, his office said the modified order clarified that religious services can be conducted if they have no more than 10 people per gathering.

“We’ve asked everybody to do the right thing,” Pritzker said.

Demonstrators who side with the lawmakers are planning to rally Friday in Chicago, where the virus case rate has started to flatten. Mayor Lori Lightfoot on Wednesday said the vast majority of residents follow orders, but said “decisive action to set the clear tone” may be necessary to keep human nature in check.

“If we just throw it up all for grabs, then God help us,” she said.