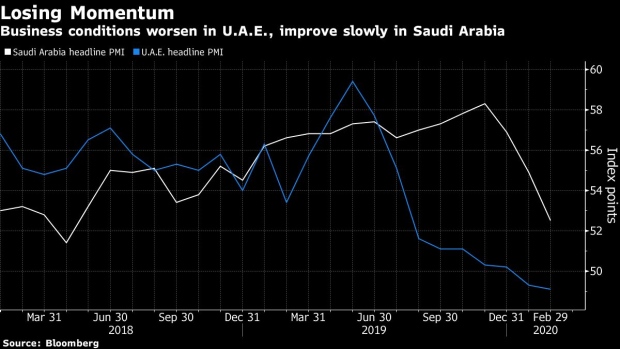 (Bloomberg) -- Business conditions in the United Arab Emirates worsened and Saudi Arabia had the weakest increase in its non-oil private sector output since at least 2009 as disruptions caused by the coronavirus rippled through the Gulf’s two biggest economies.

The spillovers into trade, tourism and supply chains resulted in “a sharp loss of momentum since the start of 2020” for Saudi Arabia, according to IHS Markit. Its Purchasing Managers’ Index for the kingdom dropped to 52.5 in February from 54.9 a month earlier, indicating the slowest pace of improvement for almost two years.

The IHS Markit U.A.E. PMI deteriorated for a second month to remain below the threshold of 50 that separates contraction from growth. “The U.A.E.’s non-oil private sector suffered another blow in February,” David Owen, Economist at IHS Markit, said in a report.

Private businesses in Saudi Arabia and the U.A.E. struggled with logistical constraints last month, which resulted in higher costs and longer lead times. IHS Markit said its latest data for Saudi Arabia showed the “sharpest lengthening” of delivery times among suppliers since the survey began over a decade ago.

Weaker momentum in non-oil economic growth is a threat for two of OPEC’s biggest producers that already face the prospect of lower crude prices if the outbreak continues to pummel energy demand. Government plans for spending cutbacks this year in Saudi Arabia could also be hurting confidence for private businesses.

Commodity exporters are especially exposed to trade with China, where the coronavirus outbreak has crippled production and consumption, as factories remain below capacity and transport is curtailed.

Among countries in central and eastern Europe, the Middle East and North Africa, Goldman Sachs Group Inc. estimates that merchandise exports to China as a share of gross domestic product are the highest in Saudi Arabia.

As part of its revised outlook that assessed the fallout from the virus, Goldman Sachs cut its forecast for Saudi GDP growth this year to 0.6% from 2.1%. The economy of the world’s biggest crude exporter expanded just 0.3% in 2019, but non-oil growth was the fastest since 2014 at 3.3%.

Here are some other highlights from the PMI reports for February:

“While many firms remained upbeat for the year ahead, business expectations were hit by fears that the virus outbreak could damage an already struggling domestic economy” in the U.A.E., Owen said.

--With assistance from Vivian Nereim and Abeer Abu Omar.

To contact the reporter on this story: Shaji Mathew in Dubai at shajimathew@bloomberg.net

To contact the editors responsible for this story: Lin Noueihed at lnoueihed@bloomberg.net, Paul Abelsky, Mark Williams