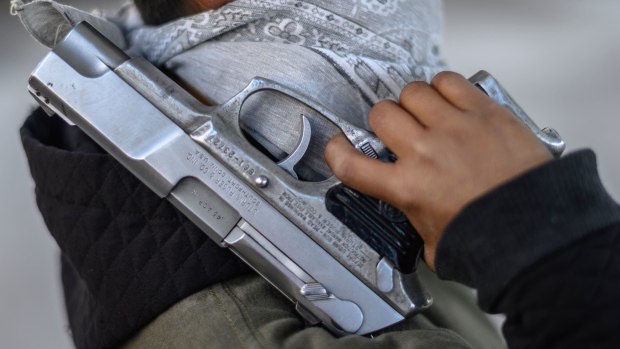 A boy holds a gun as the Regional Coordinator of Community Authorities (CRAC-PF) community police force teaches a group of children how to use weapons, at a basketball court in the village of Ayahualtempan, Guerrero State, Mexico, on January 24, 2020. Photographer: Pedro Pardo/AFP/Getty Images , Photographer: PEDRO PARDO/AFP

The armed group, wearing ski masks and driving two SUVs, killed Conrado Mendoza and his father Juan Mendoza, mayor and former mayor, respectively, of San Miguel Totolapan. Most of the 10 victims identified by authorities were members of the local government, Reforma newspaper reported.

Guerrero State Governor Evelyn Salgado Pineda, a member of the nation’s ruling Morena party, asked the state Attorney General’s Office to investigate with haste to clarify the events. “There will be no impunity for the malicious aggression against the municipal president and local government officials,” Salgado Pineda said on Twitter.

The attack involved two criminal groups known as the Familia Michoacan and the Tequileros, the latter of which for a period of time controlled the sale of heroin poppy in the area, Mejia said.

The deadly attack comes after a wave of gang violence in August that included cartel henchmen torching cars in Colima state after the arrest of their leader and narcos from the Jalisco Nueva Generacion Cartel setting fire to 25 Oxxo convenience stores in central Mexico following other arrests.

Separately, on Wednesday, a local government representative was shot and killed outside a pharmacy in the city of Cuernavaca, newspaper El Universal reported.

San Miguel Totolapan is located in the mountains of Guerrero state, about 230 miles from the tourist resort of Acapulco.

Defense Ministry agents, along with state and local police, transferred the injured to local hospitals, according to a statement from Guerrero’s Public Safety Department.

(Update with fatalities in first, criminal groups in fourth, and murder in sixth paragraph)