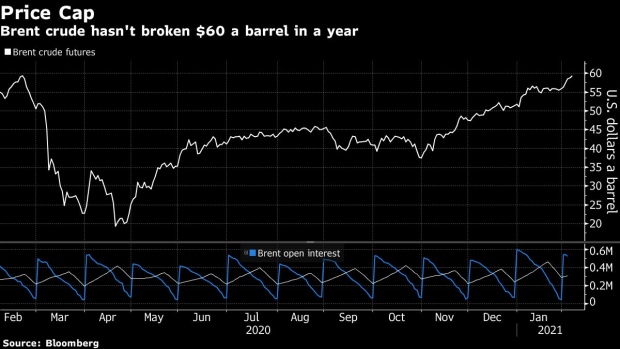 Storage tanks located near a dock for Hornbeck Offshore Services, Inc. oil industry support vessels in Port Fourchon, Louisiana, U.S., on Thursday, June 11, 2020. Oil eclipsed $40 a barrel in New York on Friday, extending a slow but relentless rise that’s been fueled by a pick-up in demand and could signal a reawakening for U.S. shale production. Photographer: Luke Sharrett/Bloomberg , Bloomberg

(Bloomberg) -- The head of Gunvor Group Ltd. said oil won’t go much beyond $60 a barrel because further gains would trigger an avalanche of shuttered supply.

“Once you hit $60 a barrel, any oil production out there is profitable, and the incentive for oil producers to hold back erodes real fast,” Torbjorn Tornqvist, Gunvor’s chairman and chief executive officer, said in an email.

Crude prices have been on a tear amid optimism that effective Covid-19 vaccines will restore demand. Benchmark Brent has surged to more than $59 a barrel this week, a gain of almost 60% since late October. Tornqvist’s view reflects concern in the market that another leg higher could prompt U.S. shale producers to restart idled wells, filling the gap left by OPEC+ supply cuts.

“The high-$50s are the higher end of our expectation for the first half, and we’re not sure we will see much higher,” the CEO said. Gunvor is one of the biggest independent energy traders, giving Tornqvist and his army of crude and petroleum-product negotiants keen insight into global supply and demand.

The market is still in the process of rebalancing, according to Tornqvist, who said output cuts by the Organization of Petroleum Exporting Countries and its allies have so far been effective. The current curbs are sufficient to spur a significant draw on crude stocks, while oil-product draws are less pronounced.

“Global products demand is 4 million to 5 million barrels less than it was a year ago,” with the most notable declines seen in jet fuel, gasoline and some diesel markets, Tornqvist said. “Demand for light ends, such as naphtha, remains robust.”

Big oil traders such as Gunvor, which handles about 2.7 million barrels a day, have largely thrived during the pandemic by taking advantage of wild price swings and exploiting regional price differences.

Oil demand as a whole “all comes down to China,” Tornqvist said. “Europe is clearly the worst hit. The U.S. is more stable, with only a couple million barrels loss in demand.”

Refining margins remain very poor and will continue to be weak until the end of the year at least, Tornqvist said.