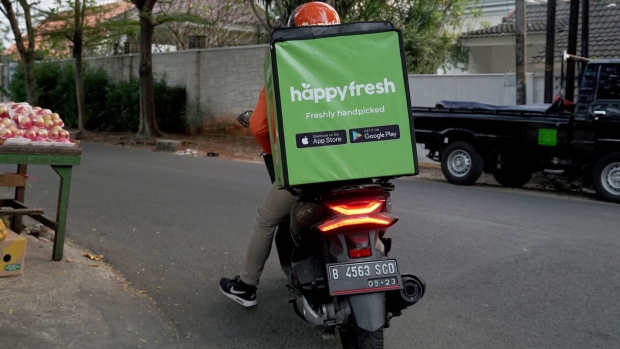 An ICart Group Indonesia PT's HappyFresh driver rides through a neighborhood in Jakarta, Indonesia, on Friday, July 12, 2019. Southeast Asia’s internet economy is on track to exceed $100 billion this year before tripling by 2025, becoming one of the world’s fastest-growing arenas for online commerce thanks to a youthful population increasingly comfortable with smartphones. Photographer: Dimas Ardian/Bloomberg , Bloomberg

(Bloomberg) -- HappyFresh’s board hired turnaround firm Alvarez & Marsal Holdings LLC and is conducting a review of the online grocer’s financial situation, according to people familiar with the matter.

The move comes after the Jakarta-based startup struggled to raise additional capital to fund its operations, said the people, who asked not to be named as the matter is private. In addition, some senior executives have stopped handling their day-to-day duties. Founded as one of the first Instacart-style grocery delivery services in Southeast Asia, HappyFresh has raised at least $97 million in equity funding in addition to debt financing.

“We have recently come to be aware of new information on the company’s finances. We are currently understanding and unpacking this financial situation of the organization more closely, with the board of directors taking the lead in this exercise,” HappyFresh said in response to questions from Bloomberg News. “This development, and taking a holistic view of the company’s future, has necessitated us reviewing our structures and making certain hard but necessary decisions.”

“Certain members of senior management have stepped aside from active duty pending further clarity,” the company said, without giving further details. A representative for Alvarez & Marsal declined to comment.

HappyFresh suspended grocery deliveries in parts of Jakarta in its key market Indonesia this week, according to a person familiar with the matter. Checks by Bloomberg showed that customers in the capital were unable to book time slots for delivery on the online grocer’s platform or make payments through its app. Customers in Bangkok and Kuala Lumpur were able to use the app as of Tuesday.

Alvarez & Marsal was the restructuring adviser that wound down Lehman Brothers Holdings’ operations about a decade ago. The global firm with more than 6,000 employees has expanded its Asia forensic technology team this year, and appointed Manas Tamotia, a 20-year consulting veteran and former chief strategy officer of HappyFresh, as a managing director to lead private equity for its Southeast Asia and Australia division.

Formally known as ICart Group Pte, HappyFresh operates in Indonesia, Malaysia and Thailand. In February, the startup launched HappyFresh Supermarket to extend fresh and dry grocery accessibility by expanding its footprint of dark stores, or storage facilities where delivery staff pick up products from.

However, the market for grocery delivery services has soured amid slowing economic growth, surging inflation and higher interest rates.

Grab Holdings Ltd., a Southeast Asian ride-hailing and delivery company and a backer of HappyFresh, said last month it decided to shut its dark-store operations in Singapore, Vietnam and the Philippines to cut costs and streamline its deliveries operations, retreating from the earlier strategy. Pandemic darling Instacart Inc., which was valued at $39 billion in a March 2021 funding round, slashed its internal valuation by about 40% a year later.