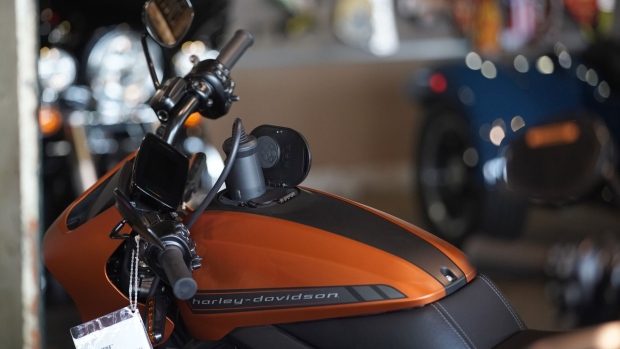 (Bloomberg) -- LiveWire Group Inc., the electric motorcycle division spun off by Harley-Davidson Inc., raised less than planned and was valued below expectations in a lackluster trading debut.

The company, which went public through a combination with a blank-check firm, brought in $295 million in net proceeds through the listing, a spokesperson said Tuesday. That’s far short of the $545 million anticipated when the deal was announced in December.

After an initial surge, the shares fell 7.1% at 2:27 p.m. in New York, valuing the company at about $2 billion. LiveWire originally expected an equity value of $2.3 billion at close.

The loss-making EV business merged with AEA-Bridges Impact Corp., a special purpose acquisition company, to help fund its business plan until it breaks even in 2026. But in the nine months since the deal was announced, investors have shied away from blank-check transactions and the broader market has declined amid runaway inflation and rising interest rates.

“We don’t have the excess liquidity that is needed to keep the SPAC bull market going,” Matthew Maley, chief market strategist at Miller Tabak + Co., said by phone. “The heyday of those is behind us.”

Harley unveiled its first electric motorcycle, LiveWire, in 2019, though sales were limited by its $30,000 price tag. It created the standalone brand and introduced the LiveWire One for $22,799 in 2021. Its lower-priced electric motorcycle, the S2 Del Mar, will go on sale next spring.

See also: Harley-Davidson’s LiveWire One Electric Motorcycle Has a Pulse

“We’re well equipped to get LiveWire through the next phase of development,” Harley Chief Executive Officer Jochen Zeitz said in an interview with Bloomberg Television. The spinoff will allow LiveWire to “innovate in the electric space while Harley focuses on its core segments.”

LiveWire began trading on the New York Stock Exchange under the ticker LVWR. Harley has said it would retain a 74% stake in the company.