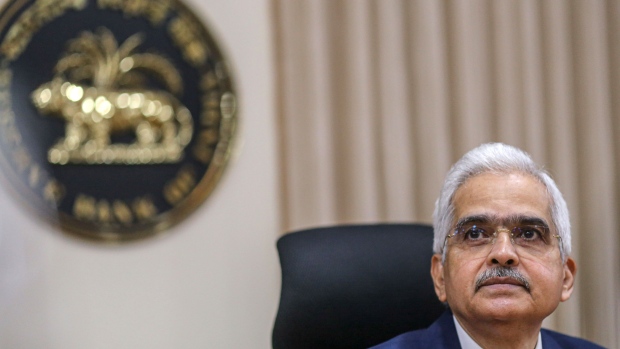 Shaktikanta Das, governor of the Reserve Bank of India (RBI), attends a news conference at the bank's headquarters in Mumbai, India, on Friday, Sep. 30, 2022. India’s central bank delivered a hat-trick of half-point interest-rate hikes, sustaining its battle to rein in inflation while flagging “calibrated action” to shield the economy amid fears of a global recession. , Bloomberg

(Bloomberg) -- The Reserve Bank of India delivered a widely expected 35-basis-point interest-rate increase on Wednesday — a decision accompanied by hawkish rhetoric that signaled at least one more hike ahead.

While Governor Shaktikanta Das said “the worst of inflation is behind us,” he also said policymakers “will keep ‘Arjuna’s eye’ on the evolving inflation dynamics and be ready to act as may be necessary.” Das referred to the archer from the Indian epic Mahabharata to signal that he’ll keep a hawk’s eye on risks.

Here’s what analysts are saying about Wednesday’s Monetary Policy Decision, and what to expect: