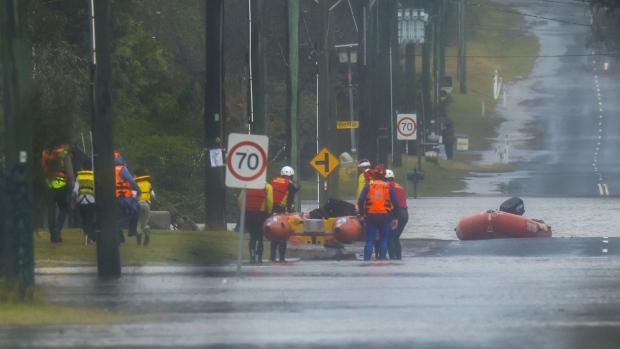 SYDNEY, AUSTRALIA - JULY 04: A family are evacuated by State Emergency Service workers due to rising floodwaters in Bligh Park on July 04, 2022 in Sydney, Australia. Thousands of residents were forced to leave their homes overnight and a number of evacuation orders are in place across Sydney as heavy rain and flooding continues. (Photo by Jenny Evans/Getty Images) , Photographer: Jenny Evans/Getty Images AsiaPac

(Bloomberg) -- Major cropping regions in some parts of eastern Australia are facing the prospect of reduced wheat and canola production after yet another bout of torrential rains.

Growers in central New South Wales are assessing the damage to planting after the downpours -- the state’s fourth major flooding incident in 18 months. Many farmers are already significantly delayed, and it’s getting to a point where even if it stops raining, it’ll be too late to finish the intended planting program, according to Rabobank agricultural analyst Dennis Voznesenski.

Even if more seeds are put in the ground, the delayed planting means that crops will be more exposed to frost, he said by email.

Still, the affected areas are a relatively small part of the total land devoted to farm production in the country, where the state of Western Australia is particularly dominant. Government forecaster Abares in June estimated the country’s wheat output at 30.3 million tons, or the fourth largest on record. A bumper crop is needed to help replenish global supplies depleted by poor weather and Russia’s war in Ukraine.