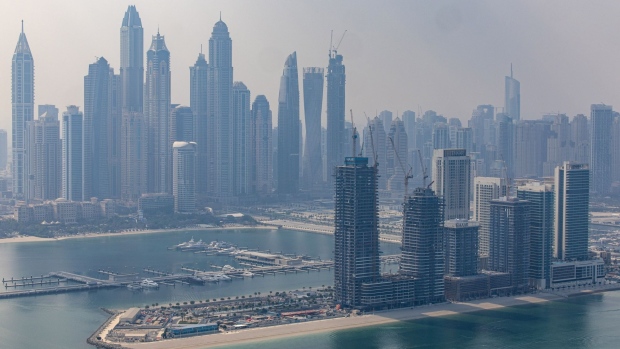 Residential skyscrapers in the Dubai Harbour and Dubai Marina districts of Dubai, United Arab Emirates, on Wednesday, Sept. 28, 2022. The emirate’s prime real-estate prices surged 70.3% over the 12 months through September, making it the biggest gainer on Knight Frank’s global index, which focuses on a city’s most desirable and expensive homes. Photographer: Christopher Pike/Bloomberg , Bloomberg

LMR Partners, a $9.8 billion hedge fund, is opening an office in Dubai, expanding into a country that has become the single biggest destination for expatriate millionaires.

The London-based firm secured a license from Dubai International Financial Centre and will start with six people, according to a person familiar with the matter. LMR is taking space in the ICD Brookfield Place and its office has room for between 25 and 30 people, the person said, asking not to be identified because the details are private.

LMR, whose traders invest in various strategies and asset classes including equities and fixed income, joins Izzy Englander’s Millennium Management and Michael Gelband’s ExodusPoint Capital Management in expanding into Dubai. The emirate is emerging as a favored destination for global financiers who are drawn by its ease of doing business, tax-free status and its allure as a global travel hub. It is also a more friendly time zone for portfolio managers who have global investments spanning North America to Asia.

“More hedge fund managers are opting to relocate to Dubai, given the emirate’s good infrastructure, low taxes, and light regulation,” said Dominic Volek, the Dubai-based head of private clients at consultancy Henley & Partners, which expects the UAE to attract a net inflow of 4,000 millionaires this year, the most of any country globally.

Higher oil prices are another draw. Crude hovering around $90 a barrel is buoying Gulf economies and markets, prompting the region’s sovereign wealth funds to invest the windfall at home and abroad.

New York-based investment firm Schonfeld Strategic Advisors expanded to Dubai last year, while All Blue Capital ditched its London headquarters to base itself in the city, where it now has almost half its global staff. Other prominent funds such as Brevan Howard and Squarepoint Capital LLP have also recently obtained licenses to operate in Dubai, according to the finance center’s public register.

LMR, which already has a presence in London, Hong Kong, New York, Glasgow and Zurich, now has six offices globally with about 190 staff.

--With assistance from Julia Fioretti.

(Updates with details in fifth and sixth paragraphs)