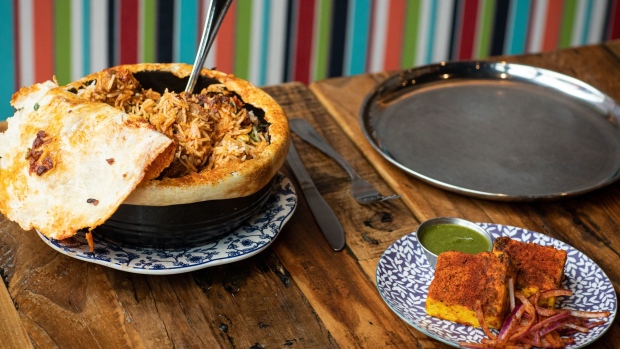 (Bloomberg) -- If you think it’s getting a little harder to find good, inexpensive food around the New York area, the Michelin Guide agrees with you.

The complete list of Michelin’s Bib Gourmands, its version of “cheap eats,” for New York and Westchester County was released on Oct. 6, along with their vaunted stars.  There are 125 spots on this year’s list. Last year, there were 131, despite pandemic restrictions that had kept restaurants operating in limited capacity and forced chefs to be more creative with their menus.

This year, Michelin defines places with Bib Gourmand meals as those where you can get two courses and a glass of wine or dessert for $49, not including tax and tip. (The reality of dining on that budget at many of the places cited below has often been called into question.)

That $49 total is an increase from the 2021 criteria, when the meal cap was $40, but it remains difficult for restaurants to make the math work. Consider the August US Bureau of Labor Statistics report, which said “away-from-home” food prices had risen 7.3% from last August, and food prices in general had increased by 10.2% in the New York and New Jersey area.

Consequently, this year’s list has only 18 new Bib Gourmands; last year there were 30.

The highest-profile 2022 addition is Dhamaka, the powerfully flavored Indian spot from Roni Mazumdar and chef Chintan Pandya, whose specialty is a whole Rajasthani rabbit. Many people felt it deserved to be on Michelin’s star list. (A second restaurant from the team, Semma, did earn a Michelin star this year.) “It’s a great restaurant,” says Michelin’s chief inspector for North America, who spoke on the condition that they could remain anonymous. “There’s always potential for growth.”

Also new to the list is Porcelain, where chef Kate Telfeyan offers a mash-up of Chinese and Korean-influenced specialties in a funky space in Ridgewood, Queens. Not far away, Rolo’s, from a couple of Gramercy Tavern veterans, offer specialties from a wood-fired oven.

There are two new spots in Westchester: The Indian-focused Chutney Masala in Irvington, and the enigmatically named White Plains Italian spot, TVB by: Pax Romana. There were no new spots in the Bronx or Staten Island.

This year’s Bib Gourmand list highlights some notable omissions. Olmsted, the popular modern American spot in Brooklyn, is not included. Neither is High Street on Hudson, in the West Village, and the engaging Cafe China in Midtown Manhattan. Other spots serving notably good food at moderate prices, like Falansai and Bonnie’s—both in Brooklyn—don’t appear on either the Bib Gourmand or star list.

And then there are the places that closed for pandemic-related reasons, such as the beloved Prune in the East Village and Bunker, the lively Vietnamese spot in Brooklyn. In fact, if you’re picking losers in this year’s Bib Gourmands, pour one out for Brooklyn. At a time when median rents in the borough are rising, inexpensive places to eat are decreasing. In 2021, Michelin listed 37 spots; this year there are 34.