This could finally be the year the TSX beats the S&P 500: Greg Taylor

This year’s slide in Hermes International shares is illustrative of the slump in expensive growth stocks, and that of the luxury sector in particular.

As the most highly rated major luxury stock, trading at 59 times estimated earnings, Hermes has fallen more steeply than lower-rated peers. Its 15 per cent drop in 2022 compares with declines of 6.3 per cent for LVMH and 5.1 per cent for Kering SA, both of which trade on multiples about half that of their smaller peer.

In a climate that favored growth stocks, Hermes was one of the French equity market’s biggest stars of 2021, rising 75 per cent in a ninth straight year of gains. Now the tables have turned after rising bond yields sparked a selloff of expensive stocks in favor of value and cyclical shares. UBS Group AG downgraded Hermes this week while raising its recommendation on Kering. 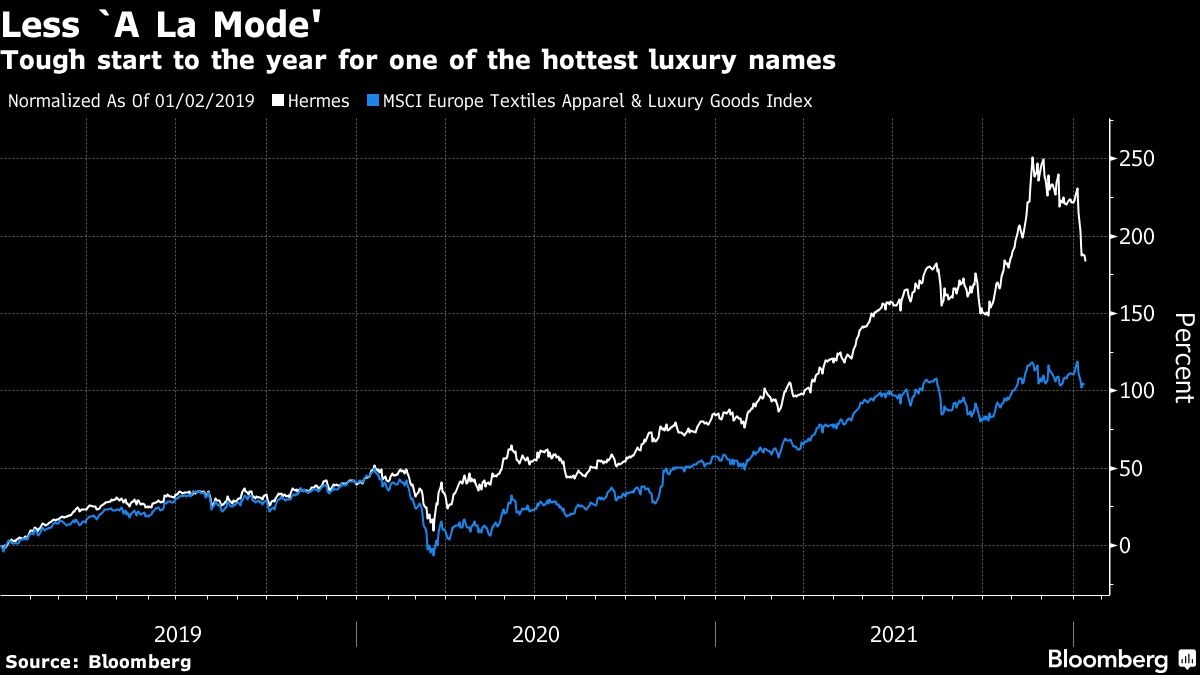 Some point to seasonality for the stock’s weak start to 2022. “It’s the January effect,” said Cedric Ozazman, chief investment officer at Reyl & Cie SA in Geneva. “It’s not a good month for momentum players and the rise in real interest rates is not good for quality names,” Ozazman said in a phone interview. “For Hermes it’s a toxic cocktail.”

Ozazman believes that LVMH may end up being the 2022 winner thanks to its exposure to reopening themes such as travel. Prestigious hotels such as the Cipriani in Venice and the Cheval Blanc Paris are part of its portfolio.

For Hermes, there may be a silver lining. While the shares declined a further 2 per cent to 1,303 euros in early Paris trading on Friday, current levels are starting to look “a compelling entry point for the long term,” Ozazman said. A price level around 1,250 euros to 1,300 euros a share appears “very interesting” for what he describes as the “best stock” in the luxury industry.