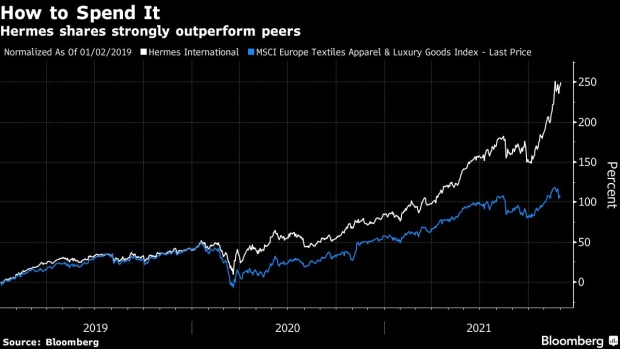 A shopper holds a Hermes International shopping bag on New Bond Street in London, U.K., on Wednesday, Aug. 18, 2021. U.K. inflation eased in July in what is widely seen as a blip on its way to double the Bank of England’s target this year. Photographer: Hollie Adams/Bloomberg , Bloomberg

(Bloomberg) -- Hermes International is set to join one of Europe’s main equity benchmarks, an inclusion that will further bolster the French luxury company’s visibility among investors.

Hermes, the maker of Kelly and Birkin handbags will replace Universal Music Group N.V. in the Euro Stoxx 50, index operator Qontigo said in a statement late on Wednesday. The change will be effective as of Dec. 20.

The inclusion is further evidence of the big-brand status of Hermes, which wasn’t even a member of France’s benchmark CAC 40 Index until June 2018. Like peer LVMH, which owns Louis Vuitton and Dior, the company has been benefiting from a boom in luxury demand that accentuated during the coronavirus pandemic.

“Hermes represents quality,” says Cedric Ozazman, chief investment officer at Reyl & Cie. “It has one of the highest Ebit margins in the discretionary universe and it’s able to resist in recessions” while generating “strong and recurrent top-line growth in boom phases,” he added.

Hermes shares have rallied 90% so far this year as of Wednesday’s close, giving the company a market value of 176 billion euros ($199 billion).

The company’s style is considered more discreet than that of rivals such as Kering SA’s Gucci, and Hermes tends to be more stable than its luxury competitors. Leather-goods production is kept under tight control, meaning long waiting lists for its iconic handbags in spite of their $10,000-plus price tag.

Inclusion in widely followed indexes is becoming more important for companies in a world increasingly dominated by passive investment funds. An estimated 27 exchange traded funds with 35 billion euros ($39.6 billion) in assets follow the Euro Stoxx 50 benchmark, according to data compiled by Bloomberg Intelligence.