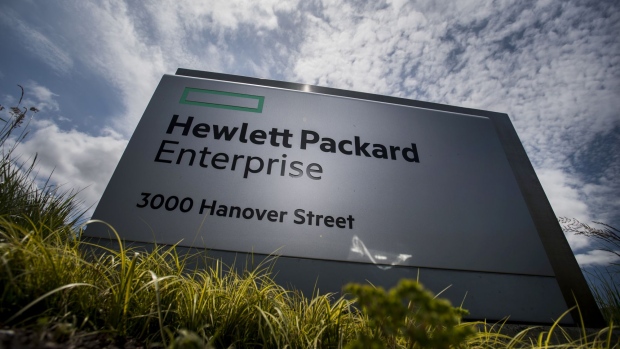 Hewlett-Packard Enterprise Inc. signage stands at the entrance of the company's headquarters in Palo Alto, California, U.S., on Monday, May 22, 2016. Bloomberg

HPE, part of one of the founding companies of Silicon Valley, also announced it’s relocating its headquarters to Houston from San Jose, California. The company said it was already building a “state-of-the-art” new campus in Houston, the fourth-largest U.S. city.

Sales were little changed from a year ago at US$7.2 billion in the three-month period that ended Oct. 31. Analysts, on average, estimated US$6.9 billion, according to data compiled by Bloomberg. Profit, excluding some items, was 37 cents a share in the fiscal fourth quarter, HPE said Tuesday in a statement. Analysts had projected 34 cents U.S.

Chief Executive Officer Antonio Neri is trying to turn around HPE, a maker of servers, storage hardware and networking gear, which had reported declining revenue in all but one quarter since separating from PC maker HP Inc. in 2015. Neri is reducing the company’s overhead costs, exiting unprofitable product segments and chasing the hybrid-cloud market, in which businesses store and process some of their information in corporate data centers and some with public cloud companies.

The spread of Covid-19 and the economic slowdown it triggered had suppressed demand for networking and computer hardware and services. Now that companies have settled into remote work for many employees, they’re investing in gear to make that more efficient.

“The global pandemic has forced businesses to rethink everything from remote work and collaboration to business continuity and data insight,” Neri said in the statement. “We saw a notable rebound in our overall revenue, with particular acceleration in key growth areas of our business.”

Fiscal fourth-quarter sales increased 6 per cent from the prior period.

In the current quarter, HPE projected that profit, excluding some items, will be 40 cents to 44 cents U.S. That compares with an average analyst prediction of 35 cents U.S., according to data compiled by Bloomberg.

As part of its headquarters move, HPE said it will consolidate a variety of sites in the San Francisco Bay Area. No staff reductions “are associated with this move,” HPE said in the statement.